A Diagram of Explanatory Dysfunction in Academia

Below is a diagram that attempts to illustrate some of the explanatory problems afflicting colleges and universities. A major factor in such problems are what we may call achievement legends. 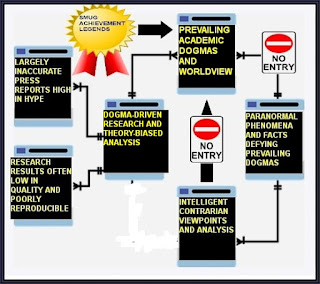 An achievement legend is a story that is repeatedly told in the classrooms of colleges and universities, a story claiming without proof that some wonderful progress was made by scientists. Such legends include the ones below and many others:

All of these stories meet the definition of legend, which is “a traditional story sometimes regarded as historical but unauthenticated.” None of these claims of achievement has been proven. There are very substantial reasons for rejecting each one of them. But these stories of great achievements keep being told again and again by our professors. One of the hardest things to dispel is a dubious achievement legend once it has spread. Such legends provide prestige boosts to various people in academia, and once a person has been hooked on an intoxicating conceit, it becomes incredibly hard for such a person to give it up and adopt a more realistic viewpoint about his relatively modest state of knowledge.

These achievement legends are pillars of a worldview that is predominant at colleges and universities. The worldview is based on the idea that the most important realities such as life and mind are explained by matter, and that such realities arose from blind accidental processes. Believing in the smug achievement legends, those who hold this worldview believe that scientists are making excellent progress in coming up with purely material explanations for life and mental phenomena.

But such a worldview is contradicted by a gigantic number of observational facts. Such facts and observations can be divided into two different categories: the paranormal and the not-at-all-spooky. In the paranormal category are a host of observations that mainstream professors may dismiss as “impossible,” even though they are massively reported. These include things such as apparition sightings, deathbed visions, near-death experiences, anecdotal accounts of clairvoyance, extremely high scores on tests of extrasensory perception (such as we would never expect any human to get by chance), photos of dramatic recurring patterns in mysterious orbs, and so forth. But there is also a huge number of "not at all spooky" observations that stand in opposition to the prevailing academic worldview. Among these are observations such as these:

These are part of a massive body of evidence that defies and discredits the worldview prevailing among the professors of academia. But such professors do a very good job of keeping their classrooms and journals and textbooks as places where such evidence is not discussed. Professors exert a kind of de facto censorship in which such opposing evidence is excluded from the sheltered world of academia. The “no entry” symbols in my diagram illustrate this type of de facto censorship.

The evidence I just discussed gives rise to contrarian viewpoints that differ from the prevailing worldview held by academic professors. But there is little or no fair discussion of such contrarian viewpoints in the regimented literature and classroom presentations of academia. If there is any discussion of such viewpoints, an academic authority will typically make sure to label the contrarian thinkers with various defamatory or deprecatory labels designed to prevent anyone from taking their opinions seriously.


Theory-biased analysis occurs both in journals and in textbooks. The observational facts are all passed through the prism of existing theories, which are often based on smug achievement legends. There will be either no discussion of a vast number of observational facts conflicting with such theories, or the discussion will be very skimpy and jaundiced. Reasonable alternative explanations will not be discussed, or will be discussed in some skimpy deprecatory manner.

The result of such research is all too often unimpressive. A significant fraction of all research findings reported in scientific journals cannot be reproduced. The problem was highlighted in a widely cited 2005 paper by John Ioannidis entitled, “Why Most Published Research Studies Are False.”

But a reader of science news sites would hardly guess that such problems exist. Every week such sites seem to report a glorious march of progress, and make it sound as if wonderful breakthroughs are occurring almost every week.  The problem is that weak scientific research and analysis is uncritically trumpeted.

Part of the problem is university press offices, which nowadays are shameless in exaggerating the importance of research done at their university. They know the more some locally arising scientific research is hyped, the more glory and attendees will flow to their university.

A scientific paper reached the following conclusions, indicating a huge hype and exaggeration crisis both among the authors of scientific papers and the media that reports on such papers:

Exacerbating this problem is an economic situation in which there is a huge monetary motivation for hyping second-rate research, to make it sound like some glorious breakthrough. Web sites that report science news have ads on their pages. The more users click on a particular page, the more money the web site makes from ad revenue. Given such a situation, there is a huge motivation for web sites to hype science research.  You won't click on some headline of "Another doubtful animal study with too small a sample." But you may click on a misleading headline of, "Amazing study unveils the secret of how memory works."  And once you make such a click, some web site will make money from some ad on the page you clicked on. So the science news hype and exaggeration keeps flowing full blast.

Almost every day in the science news you can find examples of hyped-up headlines that are inaccurate. The glaring example I find on today's ScienceDaily.com is a story with the extremely false headline "Strongest evidence yet that neutrinos explain how the universe exists." The long-standing matter-antimatter asymmetry mystery is that the Big Bang should have produced equal amounts of matter (protons and electrons) and antimatter (antiprotons and positrons), in incredible densities denser than a neutron star. Since matter and antimatter destroy each other upon contact, forming into only photons of energy,  the Big Bang should have left nothing but photons of energy.  This problem cannot at all be solved by any possible finding about neutrinos, mere "ghost particles" that are millions of times less massive than electrons, which are 1836 times less massive than protons. When you read the story you will find zero evidence justifying the headline.

In many an area of science, researchers are mostly spinning their wheels, making little progress.  A hundred promising leads are not being followed up, because professors don't want to find out about what such leads suggest, which is often that the cherished tenets of such professors are dead wrong. Meanwhile there are endless poor papers inspired by dubious theories, because professors want to be reassured that they are on the right track, and that their beloved dogmas are correct. Much too little real explanatory progress is being made, but you would never know it from reading the "hype almost anything that moves" science press, which seems to trumpet almost any dubious "glorify our guys" press release coming from a university press office, while only very rarely applying critical scrutiny to such claims.
at April 21, 2020