The leading doctrine concerning how memory is stored is the doctrine that memory is stored by a process of the strengthening of synapses of brains. But what we know about the lifetimes of proteins and synapses contradicts this doctrine. The proteins in synapses have lifetimes no longer than a few weeks (this paper finds that they have turnover at a rate of about 17% per day). The synapses themselves are short-lived compared to the 50-year time span that human memories can last.

So what we know about the lifetime of synapse components and dendritic spines contradicts the claim that human memories (lasting as long as 50 years) are stored in synapses. There is another neuroscience finding that contradicts such a dogma: the finding that there is no increase in synaptic density corresponding to an increase in human knowledge.

What should we expect from the idea that our memories are stored in synapses? We would expect that the density of synapses in the brain would increase as more memories accumulated. But that is not what we observe. In 1979 a scientific paper by Huffenlocher reached these conclusions:

So according to the paper, the density of synapses sharply decreases as you grow up. The following image from a US government web site tells essentially the same story. The red line shows dendritic spine density, roughly the same as synapse density, or something correlated with it. (The wikipedia.org article on dendritic spines says that "Dendritic spines serve as a storage site for synaptic strength.") We see this density declining after age 5. 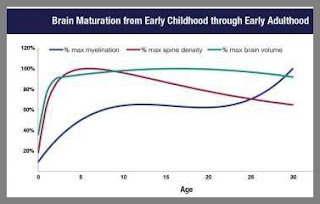 Here is a comparable graph from a National Academies Press online book. We see synaptic densities declining after age 5: 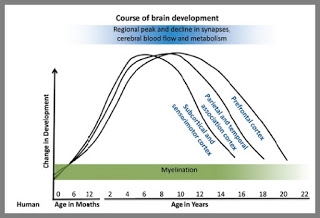 This paper says, "We confirm that dendritic spine density in childhood exceeds adult values by two- to threefold and begins to decrease during puberty."

But the study did not find that such cab drivers have bigger brains, or brains more dense with synapses. The study has been misrepresented in some leading press organs. The National Geographic misreported the findings in a post entitled “The Bigger Brains of London Cab Drivers.” Scientific American also inaccurately told us, “Taxi Drivers' Brains Grow to Navigate London's Streets.”

But when we actually look at a scientific paper stating the results, the paper says no such thing. The study (entitled “Navigation-related structural change in the hippocampi of taxi drivers”) found no notable difference outside of the hippocampus, a tiny region of the brain. Even in that area, the study says “the analysis revealed no difference in the overall volume of the hippocampi between taxi drivers and controls.” The study's unremarkable results are shown in the graph below. 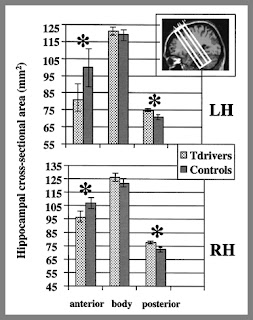 In this case, the carelessness of our major science news media is remarkable. They've created a “London cab drivers have bigger brains” myth that is not accurate.

The facts in this matter are completely at odds with the "synapses store memory" dogma that neuroscientists keep teaching (like theologians promulgating some tenet in their creed). The structural materials in synapses are way too short-lived for synapses to be a plausible place where 50-year-old memories could be stored. And instead of our synapses growing denser and denser as we accumulate memories, we have synapses much denser when we are very young with few memories than when we are adults with many times more memories. Why do our neuroscientists keep advancing an unproven theory inconsistent with the facts? Perhaps because otherwise they might have to concede that memory must involve some spiritual or inorganic component that cannot be explained through neuroscience.

But despite the lack of any solid neurological theory of memory and consciousness, those who have been indoctrinated in the dogmas of modern academia will continue to speak as they have been conditioned, and will mostly speak like Twin 1 in the imaginary dialog below between two yet-to-be born twins in the womb.

Twin 1: It looks like our happy time here in the wet womb is almost over. It's almost time for that fatal event known as “birth.”
Twin 2: I don't believe that birth will be our end. I believe in what I call “life after birth.”
Twin 1: Life after birth? Preposterous! When birth occurs, we will be severed from the umbilical cord that is the sole source of our nourishment. Death must soon follow.
Twin 2: I'm not so sure. Maybe there's some way we can survive. Somehow I think there is some mysterious reality beyond this familiar womb we have known all our existence.
Twin 1: A reality beyond the womb? What could possibly make you think of such extravagant nonsense?
Twin 2: I sometimes seem to get faint, irregular signals. It's as if I could occasionally hear faint voices coming from beyond the womb we live in.
Twin 1: Oh, so you think you've picked up paranormal signals? It's all just in your mind.

The faint voices occasionally heard by Twin 2 (the voice of parents) may be analogous to the irregular indications humans seem to get of a reality beyond our physical reality, through things such as medium activity, apparition sightings, deathbed visions, near-death experiences and the appearance of mysterious orbs in photos, as shown at my web site www.orbpro.blogspot.com.
at April 03, 2018