Some Reasons the Main Theory of Neural Memory Storage Is Unbelievable

How is it that humans can remember things for decades? For decades neuroscientists have been offering an answer: that memories are stored when synapses are strengthened. But this idea has never made any sense. There are two gigantic reasons why it cannot be correct.

The first reason has to do with how long humans can remember things. People in their sixties or seventies can reliably remember things that they saw 50 or more years ago, even if nothing happened to refresh those memories in the intervening years. I have a long file where I have noted many cases when I remember very clearly things I haven't thought about, seen or heard about in four or five decades, memories that no sensory experiences or thoughts ever refreshed. I have checked the accuracy of very many of these memories by using resources such as Google and Youtube.com (where all kinds of clips from the 1960's TV shows and commercials are preserved). A recent example was when I remembered a distinctive characteristic of the “Clutch Cargo” animated TV show (circa 1960) that I haven't watched or thought about in 50 years, merely after seeing a picture of Clutch Cargo's head. The characteristic I remembered was the incredibly poor animation, in which only the mouths moved. Using youtube.com, I confirmed that my 50-year old recollection was correct. A scientific study by Bahrick showed that “large portions of the originally acquired information remain accessible for over 50 years in spite of the fact the information is not used or rehearsed.”

Is this reality that people can remember things for 50 years compatible with the idea that memories are stored by a strengthening of synapses? Synapse strengthening occurs when proteins are added to a synapse, just as muscles are strengthened when additional proteins are added to a muscle. But we know that the proteins in synapses are very short-lived. The average lifetime of a synapse protein is less than a week. But humans can reliably remember things for 50 years, even information they haven't reviewed in decades. Remarkably, the length of time that people can reliably remember things is more than 1000 times longer than the average lifetime of a synapse protein.

Consequently, it is absurd to maintain that long-term memory results from synapse strengthening. If synapse strengthening were the mechanism of memory storage, we wouldn't be able to remember things for more than a few weeks. We can compare the synapse to the wet sand at the edge of a seashore, which is an area where words can be written for a few hours, but where long term storage of information is impossible.

It may be noted that scientists have absolutely not discovered any effect by which synapses undergo any type of strengthening lasting years. Every single type of synapse strengthening ever observed is always a short-term effect not lasting for years.

Below are some examples:

So basically every case in which we are sure information is being stored does not involve strengthening. What sense, then, does it make to claim that memory could be stored in synapses through strengthening?

In all of the cases above, information is stored in the same way. Some unit capable of making a particular type of impression or mark (physically visible or perhaps merely magnetic) moves over or strikes a surface, and a series of impressions or marks are made on the surface. Such a thing is not at all a process of strengthening.

An additional reason for rejecting the synaptic theory of memory storage is that according to such a theory a memory could only be formed after a synapse was strengthened by proteins (something requiring at least minutes for protein synthesis). But humans can form a new memory instantly. Imagine if someone walks into your workplace naked or firing a gun. It wouldn't take you minutes to form a permanent memory of that. The memory would form instantly. But new proteins (such as would be needed to strengthen a synapse) could never form instantly. We know that the synthesis of new proteins requires minutes.  If forming new memories required the synthesis of new proteins, the brain would never keep up with sensory experiences which keep coming at you continuously. I can watch a 30-minute television drama, and then tell you every major thing that happened in the show. I wouldn't be able to do that if each new thing I saw required the synthesis of a new protein which required several minutes.

In his Nautilus post “Here's Why Most Neuroscientists Are Wrong About the Brain,” C. R. Gallistel (a professor of psychology and cognitive neuroscience) points out the absurdity of thinking that mere changes in synapse strengths could store the complex information humans remember. Gallistel writes the following:

It does not make sense to say that something stores information but cannot store numbers. Neuroscientists have not come to terms with this truth. I have repeatedly asked roomfuls of my colleagues, first, whether they believe that the brain stores information by changing synaptic connections—they all say, yes—and then how the brain might store a number in an altered pattern of synaptic connections. They are stumped, or refuse to answer....When I asked how one could store numbers in synapses, several became angry or diverted the discussion with questions like, “What’s a number?”

Gallistel suggests a radically different idea, that a memory is stored in a brain as a series of binary numbers. There is no evidence that this is true, and we have strong reasons for thinking that it cannot be true. One reason is that there is no place in the brain suitable for storing binary numbers, partially because nothing in the brain is digital, and everything is organic. Another reason is there is no plausible physiology by which a brain could write or read binary numbers. Another reason is that we cannot account for how a brain could possibly be converting words and images into binary numbers. A computer does this through numerical conversion subroutines and by using a table called the ASCII code. Neither numerical conversion subroutines nor the ASCII code is available for use within the brain.

What our neuroscientists should be doing is telling us, “We have no workable theory as to how a brain could store and instantly retrieve memories.” But rather than admit to such a lack of knowledge, our neuroscientists continue to profess the untenable synapse theory of memory.  For they want at all costs for us to stay away from a very plausible idea they abhor: that episodic and conceptual memory is a spiritual effect (a capability of the human soul) rather than a neural effect.

Many think that there is an exact match between the assertions of scientists and observations. But this is not correct. The diagram below shows something like the real situation. Claims such as the claim that memories are stored in synapses are part of the blue area, along with many dogmatic and overconfident pronouncements such as string theory, multiverse speculations and evolutionary psychology. The idea that memory is an aspect of the human soul rather than the brain is supported not only by many observations in the green area of the diagram (observations that a typical scientist would not dispute), but also by many observations in the red area (such as the massive evidence for psychic phenomena). See the posts at this site for a discussion of very many of these observations. 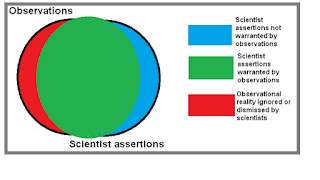 Do not be fooled by the small number of scientific papers that claim to have found evidence for an engram or memory trace. As discussed here, I examined about 10 such papers, and found that almost all of them have the same defect: the number of animals tested was way below the standard of 15 animals per study group, meaning there is low statistical power and a very high chance of a false alarm.  Besides a reliance on subjective judgments of freezing, the papers all deal with small animals, and don't tell us anything about human memory.

Occasionally, a neuroscientist will "fess up" about how little evidence there is for the dogma about a brain storage of memories. The neuroscientist Alex Fox once said, "Memory storage in the brain is only a theoretical concept."  He also stated, "We haven’t come even close to understanding even the most basic types of functioning in the brain."
at September 09, 2018

Email ThisBlogThis!Share to TwitterShare to FacebookShare to Pinterest
Labels: synapse theory of memory