He Had Half a Brain and Above Normal Intelligence

Discussing hemispherectomy operations in which half of a brain is removed to stop seizures, the paper here states,  "Others, (Ogden, 1988; Riva & Gazzaniga, 1986; Vargha-Khadem et al., 1997a; Verity, 1982) have reported excellent, even normal linguistic abilities after hemispherectomy of either side" of the brain. An interesting scientific paper is entitled, "When only the right hemisphere is left: Studies in language and communication." The study gives us an in-depth analysis of a subject named BL who as a child had half of his brain removed (the left half) in a hemispherectomy operation to reduce seizures.  The paper tells us that BL has "above normal intelligence" and that he graduated from college with a bachelor's degree in business and sociology.  In a battery of tests of memory and language, the subject showed normal results, with only slight, subtle deficits. He scored above-average on a few memory-related tests, such as the Boston Naming Test and the Famous Names and Faces test.  We are told, "Regarding speech, language, and communicative function, BL's performance appears grossly normal in pronunciation, grammar, semantics, and usage."

Referring to patients who had half of their brains removed in hemispherectomy operations, the paper states, "The numerous observations on cognitively intact persons hemispherectomized in childhood bring to mind the report of Lorber (1983) on hydrocephalic adults, whose brains are constituted of only a thin layer of cerebral tissue, and yet who enjoy normal or superior motor and cognitive abilities." Talking about the small effect of hemispherectomy operations in which half of a brain is removed, a doctor states, "When you take out half of their brain in one sitting it’s as if they weren’t touched."

In 2019 doctors were surprised to discover that a 60-year-old man had only half a brain. He was missing the left half of his brain. But the man had got a university degree in engineering (one of the most intellectually demanding subjects), and the man stated, "I have lived a normal life, nothing worried me at all." He had successfully worked as an engineer in a factory.

Facts such as these help to debunk dogmas such as the dogma that the brain is the source of our minds and the storage place of our memories.  There are many facts and reasons that lead to such a conclusion. Below are some of them.

These things all indicate that our minds and memory (or paranormal phenomena) must be the result of some spiritual or immaterial aspect of man or some soul aspect of man, in direct contradiction to the position of materialism that such a thing does not exist. 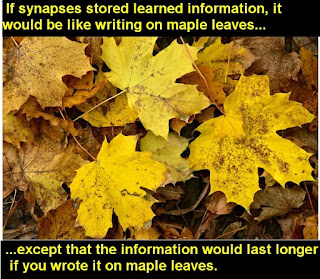