Certain stories crop up in the scientific literature, and persist year after year despite a lack of solid basis in fact. One such story is that Galileo threw spheres of different weights from the Leaning Tower of Pisa to test whether they would reach the ground at the same time. A wikipedia.org article on the experiment says such an experiment (never reported by Galileo) probably never occurred.

Another such story is the idea that Darwin found evidence for his ideas about evolution in finches he studied at the Galapagos Islands. Page 35 of a long paper on the topic by a Harvard scientist (entitled “Darwin and His Finches: The Evolution of a Legend” ) states Darwin “never actually put finches forward as evidence for the theory of evolution.” Page 39 states this:

In spite of the legend’s manifest contradictions with historical fact, it successfully holds sway today in the major textbooks of biology and ornithology, and is frequently encountered as well in the historical literature on Darwin. It has become, in fact, one of the most widely circulated legends in the history of the life sciences, ranking with famous stories of Newton and the apple and of Galileo’s experiments at the Leaning Tower of Pisa.

On page 134 of his recent biography of Darwin, A.N. Wilson states the following:

Peter and Rosemary Grant, evolutionary biologists from Harvard University, spent twenty-five summers studying these birds....They revealed that the beak changes were reversible -- this is hardly 'evolution.'  Beaks adapted from season to season, depending on whether droughts left large, tough seeds, or heavy rainfall resulted in smaller, softer seeds.

A legend that arose fairly recently is that split-brain patients patients have a splitting of their perception, or maybe something like “split consciousness.” Such an idea was based on research done by Roger Sperry and Michael Gazzaniga. A split-brain patient is a patient who has a severing of the corpus callosum, a mass of fiber-like nerves that connect the left hemisphere of the brain and the right hemisphere of the brain.

Even though split-brain patients continued to show a unity of consciousness, and did not by any means show something like a split personality, materialists have tried to make as much hay as possible out of the research of Sperry and Gazzaniga. For example, in 2007 psychologist Steven Pinker claimed that “Surgery that severs the corpus callosum, separating the two hemispheres (a treatment for epilepsy), spawns two consciousnesses within the same skull,” and spoke as if this alleged observation was evidence against a human soul. Such a claim was bogus. None of the experimental results reported that split-brain patients had two consciousnesses.

In 2014 the wikipedia.org article on split-brain patients stated the following:

In general, split-brained patients behave in a coordinated, purposeful and consistent manner, despite the independent, parallel, usually different and occasionally conflicting processing of the same information from the environment by the two disconnected hemispheres...Often, split-brained patients are indistinguishable from normal adults.

On page 202 of his recent book "The Consciousness Instinct" neuroscientist Michael Gazzaniga claims  that “a neurosurgeon can disconnect the two hemispheres of the brain and produce two minds in your single head.” The claim is false, and he provides no historical examples of this happening. In fact, on page 203 Gazzaniga refers to split-brain patients, and says, “Oddly, after having their brains cut in half, all those patients said they felt fine, and the only difference they noted was the loss of seizures.” That statement contradicts his statement on page 202.

In the video here we see a split-brain patient who seems like a pretty normal person, not at all someone with “two minds." And at the beginning of the video here the same patient says that after such a split-brain operation “you don't notice it” and that you don't feel any different than you did before – hardly what someone would say if the operation had produced “two minds” in someone. And the video here about a person with a split brain from birth shows us what is clearly someone with one mind, not two.

A  scientific study published in 2017 set the record straight on split-brain patients. The research was done at the University of Amsterdam by Yair Pinto. A press release entitled “Split Brain Does Not Lead to Split Consciousness” stated, “The researchers behind the study, led by UvA psychologist Yair Pinto, have found strong evidence showing that despite being characterised by little to no communication between the right and left brain hemispheres, split brain does not cause two independent conscious perceivers in one brain.”


The press release states the following: “According to Pinto, the results present clear evidence for unity of consciousness in split-brain patients.” The paper states, “These findings suggest that severing the cortical connections between hemispheres splits visual perception, but does not create two independent conscious perceivers within one brain.” Their paper had the visual below showing their results: 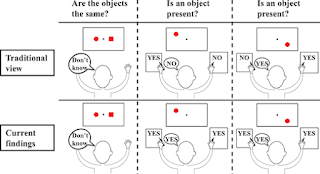 Pinto and his colleagues criticize the research previously done on this topic, saying the following:

Strikingly, although this clinical observation features in many textbooks (Gazzaniga et al., 1998; Gray, 2002) the reported data are never quantitative...Sperry notes: ‘Although the general picture has continued to hold up in the main as described [… .] striking modifications and even outright exceptions can be found among the small group of patients examined to date.’

So apparently the original researchers weren't very numerically precise in measuring things, and got mixed results. Such nuances were ignored by a host of writers eager to use Sperry and Gazzaniga's research as something to prop up conventional dogmas that the brain generates the mind. Now doing things in a proper quantitative way, Pinto and his colleagues have come up with a result conflicting with the result of Sperry and Gazzaniga, a result telling us that split-brain patients have a perceptual unity of consciousness.

Pinto's paper notes that his findings spell trouble for two theories of consciousness, the Global Workspace Theory, and the Integrated Information Theory, which are just flavors of the theory that brains make minds:

This preserved unity of consciousness may be especially challenging for the two currently most dominant theories of consciousness, the Global Workspace theory (Baars, 1988, 2005;Dehaene and Naccache, 2001) and the Integration Information theory (Tononi, 2004, 2005; Tononi and Koch, 2015). A core assumption of the Global Workspace theory is that cortical broadcasting of selected information by the ‘global workspace’ leads to consciousness. Thus severing of the corpus callosum, which prevents broadcasting of information across hemispheres, seems to exclude the emergence of one global workspace for both hemispheres. Rather, it seems that without a corpus callosum either two independent global workspaces emerge, or only one hemisphere will have a global workspace, while the other does not. In either case, an integrated global workspace, and thus preserved conscious unity, seems to be difficult to fit into this framework.

The general prediction of the "minds come from brains" dogma would seem to be that if you split a brain so that the left half is not connected to the right half, this should result in two minds -- perhaps a "left half of the body in conflict with the right half of the body" situation. But no such thing occurs. After the split-brain operation there is still one consciousness and one self that at worst has some minor perceptual issues.  The result of a unified consciousness in split-brain patients is perfectly compatible with the thesis of this website, that the human mind is not produced by the brain.

Postscript: See also this scientific paper "The Myth of Dual Consciousness in the Split Brain." The actual facts about split-brain surgery are related here by a surgeon who has performed such an operation. He states this about split-brain patients:

"After the surgery they are unaffected in everyday life, except for the diminished seizures. They are one person after the surgery, as they were before."

The surgeon states: "In a rational scientific community in which evidence and reason held sway, split-brain surgery would be hailed as compelling evidence for dualism and the immateriality of the intellect and will."
Physician Michael Egnor states the following about Sperry's research:
"The neuroscientist Roger Sperry studied scores of split-brain patients. He found, surprisingly, that in ordinary life the patients showed little effect. Each patient was still one person. The intellect and will – the capacity to have abstract thought and to choose – remained unified. Only by meticulous testing could Sperry find any differences: their perceptions were altered by the surgery. Sensations – elicited by touch or vision – could be presented to one hemisphere of the brain, and not be experienced in the other hemisphere. Speech production is associated with the left hemisphere of the brain; patients could not name an object presented to the right hemisphere (via the left visual field). Yet they could point to the object with their left hand (which is controlled by the right hemisphere). The most remarkable result of Sperry’s Nobel Prize­–winning work was that the person’s intellect and will – what we might call the soul – remained undivided. The brain can be cut in half, but the intellect and will cannot. The intellect and will are metaphysically simple."
at April 10, 2018