The arXiv science paper server at https://arxiv.org/ is a widely used resource for finding and reading scientific papers. On its home page we read, "arXiv is a free distribution service and an open-access archive for 1,780,158 scholarly articles in the fields of physics, mathematics, computer science, quantitative biology, quantitative finance, statistics, electrical engineering and systems science, and economics."  It has become something of a custom for physicists to upload "preprints" of physics papers to this server. Although mainly associated with physics papers, the server also has a huge number of quantitative biology papers.

An interesting way to use the arXiv server is simply to search for a topic, and see how high the paper count is (in other words, how many papers the server has on a particular topic). Such a method gives a rough idea of how much work has been done on a particular topic. It is not at all true that you can prove something is really science by doing a search for some topic and getting a high paper count. For example, when I search for papers with the word "string" in the title, on October 23, 2020, I get a count of 12,766 papers, a large fraction of which are papers expounding versions of string theory. But string theory is a speculative edifice that is not at all "science with a capital S," and has no observational basis.

While we can't tell that something is science just by searching for a topic and getting a high paper count, if we search for a topic and get a very low count, that is a reason for suspecting that the topic may not be any such thing as "science with a capital S."  That's what happens when I search for the topic of "engram."  An engram is an alleged brain location where a memory is stored, or some kind of "memory trace" in the brain.  When I search for papers having "engram" or "engrams" in their title, using the arXiv science paper server, the server gives me a count of 0 such papers.

Could it be that the arXiv science paper server just doesn't have many papers on biology? No, it has tons of papers on quantitative biology.  Below are a few examples of paper counts when I search for some biology topics:

So how come the server gives us no papers when we search for "engram" as the topic? Maybe it's because engrams aren't really science with a capital S.

There's another way to do a search on the arXiv server. You can search for any use of the search topic in the abstract of the paper. When I do such a search, I get only 5 papers. Four of the five papers have no solid observational grounding, and are the kind of mathematical speculation papers that scientists write when they attempt to substantiate very doubtful speculations such as string theory or dark energy or primordial cosmic inflation.  The only paper built upon observations is a paper entitled "Recording and Reproduction of Pattern Memory Trace in EEG by Direct Electrical Stimulation of Brain Cortex."  The paper does not actually provide robust evidence that any such thing as a memory trace was detected.  To do such thing, you would need to have a study group of at least 15 animals, but we read in the paper that "the experiments were performed on 5 outbred male rats."  Using such a too-small study group, you have too high a chance of a false alarm.

There is another "preprint paper server," one more oriented toward biology papers.  It is called bioXriv, and bills itself as "the preprint server for biology."  When I use that server to look for papers that contain "engram" in the title, I get only 6 papers.  Below is a comparision with other topics:

So the only six papers on the biorXiv server mentioning "engram" in their title fail to provide any robust evidence of engrams. Its the same thing for the 8 papers using "engrams" in their title. All in all, we have in these very low server counts (and the weaknesses of the papers coming up in the searches) a strong suggestion that engrams (supposed neural storage sites for memories) are not any such thing as well-established science, and that the evidence for engrams is merely very weak evidence rarely conjured up by scientists clumsily trying to provide some evidence for something they want to believe in. Engrams are not an example of science with a capital S.

My criticisms of such papers for using too small study group sizes is partially based on the guideline in the paper "Effect size and statistical power in the rodent fear conditioning literature – A systematic review," which mentions an "estimated sample size to achieve 80% power considering typical effect sizes and variances (15 animals per group)," and says that only 12% of neuroscience experiments involving rodents and fear met such a standard.

The failure of experimental neuroscientists to adequately follow blinding protocols is a huge problem in contemporary neuroscience research, as big as the failure of most such neuroscientists to use adequate study group sizes. Be suspicious of junk science wherever you find experiments not using proper blinding protocols.  A PLOS Biology article tells us, "Recent analyses have found, for example, that 86%–87% of papers reporting animal studies did not describe randomisation and blinding methods, and more than 95% of them did not report on the statistical power of the studies to detect a difference between experimental groups."

Ian Stevenson MD once made some candid comments relevant to the topic of engrams, stating this:

"Neuroscientists and psychologists cannot tell us either how we store memories or how we retrieve them. Suggestions that experiences leave 'traces' in the brain (whether in altered neural networks or otherwise) have not so far led to further understanding." 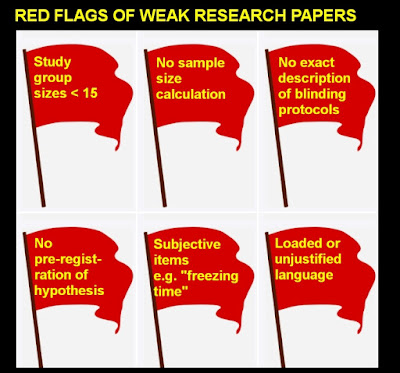