When Clue-Blind Professors Ignore All the Signs

The 1999 film "The Sixth Sense" is widely considered the best film of the director M. Night Shyamalan, who wrote the script. If you have not seen this film, I suggest streaming it or catching it on youtube.com or pay TV before reading the rest of this post, which has spoilers concerning its ending.

At the end of the film there is a plot twist that isn't really a plot twist because you should have been able to anticipate it, although most people fail to do so. The story goes like this:

First, we see a child psychologist character named  Crowe (played by Bruce Willis) being shot in the chest at point-blank range by someone intruding into his home. Then we see Crowe meeting a boy who confesses that he sees ghosts walking around, who are unaware they have died.  There are various spooky occurrences, and at the end comes the big plot twist. It turns out that Crowe, who most viewers of the movie thought was a regular physical person, is actually a ghost, one of the deceased people that the boy can see. Only at the end of the movie does Crowe realize that he was killed in the gun attack at the beginning of the movie.

Members of the original audience of the movie must have kind of slapped their foreheads upon seeing the movie's ending, saying to themselves, "I'm such an idiot -- why didn't I figure that out all along?" There were actually two very clear reasons for suspecting that Crowe (the Bruce Willis character) was a ghost throughout his interactions with the boy. They were:

(1) We see the character Crowe shot at point blank range at the beginning of the movie.

(2) After he was shot, we never see Crowe having a back-and-forth two-way conversation with anyone other than the boy who sees ghosts who do not know they are dead. We see Crowe talking to his wife, but she is just staring into space, as if she could not even see or hear him.

In retrospect, it was easy to figure out the plot twist at the end, that all through the movie the boy was talking to the ghost of Crowe. But the audiences who first saw the movie were clue-blind, and very surprised by the ending. There is today a large group of people who seem even more clue-blind. This group is the group of materialist professors who deny the existence of a human soul, and claim that all mental phenomena come from the brain, and that the brain is the storage place of memories.

Let us consider some of the clues that reality has given us about the relation of the body and the mind.

All these clues tell us in a very loud voice that we are souls rather than being mere products of brains, souls that can sometimes display (either through their own ability or through interaction with other souls) powers far beyond any neural explanation. Such clues give us every reason for thinking that our memories are not stored in our brains, and that our memories and minds and identities will survive physical death, because they never were products of our brains. But our materialist professors continue to ignore every one of these clues, and believe the groundless idea that our minds are merely the products of brains that store our memories.
We should not call such professors "clueless," because that might suggest they have not been given clues. A much better term to use is "clue-blind." Should we say that our materialist professors are as clue-blind as the original audience of "The Sixth Sense"? That would not be a very apt comparison, because such an audience had only two clues to which they were blind. But our materialist professors are blind to so many different very obvious clues.
To get a better analogy for how enormously clue-blind our materialist professors act, let us imagine another movie, one we may call "The Boy Who Saw Ghosts."  The plot might go like this:
Now imagine an audience were to watch this movie, and suppose the audience was to ignore all of these hard-to-ignore clues, and still keep thinking that Chenson was a regular physical human as he talked to the boy throughout the movie, believing that idea until the end of the movie when it was revealed that Chenson was killed by the intruder's gunfire. How clue-blind would such an audience be? Such an audience would be like materialist professors who continue to maintain that we are merely accidental soulless products of activity in a brain that stores our memories, despite so many powerful clues telling us that exactly the opposite is true, that we are souls hanging around in bodies that are not essential for our minds or our memories, and residents of a purposeful cosmos.
Another analogy for our clue-blind materialist professors is the analogy of someone who intends to drive from St. Louis to New York, and drives halfway from St. Louis to Los Angeles, constantly ignoring the setting sun ahead of him which tells him he is traveling west rather than east, and constantly ignoring the road signs telling him he is driving west rather than east. 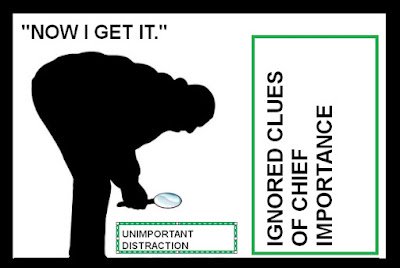