In another post on this site, I presented many cases showing that people can have very high mental function despite massive brain damage. In this post I will look some additional cases showing such a thing.

First let's look at some results concerning strokes. This article in US News and World Report says, "It’s important to recognize that strokes do not cause a drop in overall intelligence.” This paper refers to “the generally minor effect of stroke on IQ” in children.

A paper here noted a case of retrograde amnesia (failure to remember previous memories) that went across many domains of knowledge. But the paper noted, "Across all domains tested, LSJ showed losses of knowledge at a level of breadth and depth never before documented in retrograde amnesia."  Note the "never before documented."  If brains are storing our memories, you would think that many such cases would have been previously documented, because of all the people suffering brain jury from disease, cancer, or car accidents.

The recently published scientific paper here is entitled “A Lesion-Proof Brain? Multidimensional Sensorimotor, Cognitive, and Socio-Affective Preservation Despite Extensive Damage in a Stroke Patient.” Here is an astonishing report from the paper's abstract, describing a patient who seems mentally undamaged despite massive brain injury:

At age 43, patient CG sustained a cerebral hemorrhage and a few months later, she suffered a second (ischemic) stroke. As a result, she exhibited extensive damage of the right hemisphere (including frontal, temporal, parietal, and occipital regions), left Sylvian and striatal areas, bilateral portions of the insula and the amygdala, and the splenium. However, against all probability, she was unimpaired across a host of cognitive domains, including executive functions, attention, memory, language, sensory perception (e.g., taste recognition and intensity discrimination), emotional processing (e.g., experiencing of positive and negative emotions), and social cognition skills (prosody recognition, theory of mind, facial emotion recognition, and emotional evaluation).

Below is the paper's startling discussion of the very well-preserved memory in this patient who had suffered heavy brain damage from two strokes:

Even more striking are her mnemonic skills: her procedural and semantic knowledge is fully preserved, as shown in her smooth execution of various action routines (e.g., handling her cell phone, tying her shoe laces) and her intact naming and classification skills (e.g., she could flawlessly denominate all the objects she had thematically organized in different sections of her purse); furthermore, her declarative memory is extremely detailed for events which happened weeks, months, and even years ago. She could describe scenes from her childhood and adolescence, she meticulously narrated episodes occurring immediately before and after her strokes, she remembered the names, specialties, and suggestions of all her doctors, and she could recount details of dozens of books she had read throughout her life.

We know that Alzheimer’s disease can cause an inability to recall memories, although whether the memories are actually lost is debatable. What is remarkable is the fact that a large fraction of the brain can be ruined by Alzheimer’s disease before a patient can become noticeably poor at remembering things. Here is a quote from an expert on the disease:

One of the big challenges we face with Alzheimer's is that brain cell destruction begins years or even decades before symptoms emerge. A person whose disease process starts at age 50 might have memory loss at 75, but by the time we see the signs, the patient has lost 40 to 50 percent of their brain cells.

The same very astonishing thing is said in this article, which quotes an expert saying the following:

In Alzheimer’s, brain cells start to die 10, 15, or 20 years before symptoms appear. By the time we observe memory lapses, 40 percent to 50 percent of brain cells are gone, and it’s too late to make a difference.

These statements are astonishing. If our memories are all stored in our brains, why would you have to lose 40 to 50 percent of your brain cells before people started noticing your memory loss? Again, this suggests merely a low correlation between brain health and mental function.


On this page we have the amazing story of an MIT student who helped doctors find a baseball-sized tumor in his brain. Doctors performed surgery and removed the tumor. Later, the student gave a presentation to cancer researchers. A video of the presentation is included on that page. Amazingly, the young man seems to show no sign whatsoever of a damaged mind. He walks and talks normally, and seems to have slick presentation skills sufficient to land him a job as a host on a morning TV show. The page tells us that this young man is now pursuing a PhD in mechanical engineering. In the presentation, the young man tells us that the doctors removed about 12 billion neurons in his brain.

Figure 8 of this paper gives us a graph that compares verbal IQ with brain tumor size in a variety of brain cancer patients. Under materialist assumptions, we would expect that there should be a strong inverse correlation between something like verbal IQ and the size of a brain tumor; the bigger the brain tumor, the lower your verbal intelligence should be. But what we see is only a low correlation – a correlation of only .28. High correlations have values like .75 or .85. Astonishingly, the person with the highest verbal intelligence had the biggest brain tumor, and the person with the second highest intelligence also has a very large brain tumor. We can easily account for the slightly-below-average IQ scores of brain tumor patients by simply assuming that in these brain tumor patients there would often be visual perception problems, muscular coordination problems, psychological distress, and head pain problems, which would tend to slightly decrease scores in pencil-and-paper IQ tests, without there actually being a decrease in intelligence.

It is part of the dubious folklore of neuroscientists that the prefrontal cortex is some center of higher reasoning. But the scientific paper here tells us that patients with prefrontal damage "often have a remarkable absence of intellectual impairment, as measured by conventional IQ tests." The authors of the scientific tried an alternate approach, using a test of so-called "fluid" intelligence on 80 patients with prefrontal damage.  They concluded "our findings do not support a connection between fluid intelligence and the frontal lobes." Table 7 of this study reveals that the average intelligence of the 80 patients with prefrontal brain damage was 99.5 – only a tiny bit lower than the average IQ of 100. Two of the brain-damage patients had genius IQs of higher than 140. This is not a result consistent with the claim that brains make minds.

In a similar vein, the paper here tested IQ for 156 Vietnam veterans who had undergone frontal lobe brain injury during combat. If you do the math using Figure 5 in this paper, you get an average IQ of 98 for these 156 brain-damaged veterans, only two points lower than average. You could plausibly explain that 2 point difference purely by assuming that those who got injured had a very slightly lower average intelligence before they were injured.

It also should be remembered that brain-damaged patients taking standard IQ tests may have higher intelligence than the test score suggests.  A standard IQ test requires visual perception skill (to read the test book) and finger coordination (to fill in the right answers using a pencil). Brain damage might cause reduced finger coordination and reduced visual perception unrelated to intelligence; and such things might cause a subject to do below-average on a standard IQ test even if his intelligence is normal.  And if you're a patient with a terminal brain tumor, you may have psychological distress and head pain that may cause a reduced score in your paper-and-pencil IQ test.


There is a type of surgery called a hemispherectomy, and is sometimes performed on children experiencing severe seizures. The operation involves surgically removing half of the brain. The surgery is described in a Scientific American article entitled Strange but True: When Half a Brain Is Better than a Whole One. The article states: “Unbelievably, the surgery has no apparent effect on personality or memory.”

When we consider sudden traumatic injury to the brain, we also find some cases where the correlation between brain health and mental function seems to be merely a low correlation. One astonishing case is that of Gabby Giffords, a US congress representative who was shot at point-blank range in the back of the head. Not only did she live, but she has recovered to a remarkable degree, to the point of being able to bike, and speak clearly (although in shorter sentences). A similar case was the famous case of Phineas Gage, a nineteenth century railroad worker who had a thick iron railroad spike accidentally drive through his skull, piercing his frontal lobes. A physician reported after examining Gage that he was “quite recovered in his faculties of body and mind.” Gage seems to have had some personality changes later, which may or may not have been related to his injury. But such changes are trivial compared to what we would have expected from such an injury under materialistic assumptions about the brain. An expert on Gage has stated that the personality change “did not last much longer than about two to three years,” but Gage lived for 12 years after the accident.

It has been estimated that the cerebellum contains between 50 percent and 80 percent of the neurons in the brain.  In China a woman was discovered to have no cerebellum at all. But her defects were relatively minor, such as slurred speech, a need to use something like a cane to walk, and a lack of athletic ability. The woman could understand speech well enough. According to a scientific paper describing her, she had merely "mild mental impairment." This is yet another case showing only a small correlation between brain health and intellectual ability.

These cases all tell us the same thing: that there is merely a low correlation between brain health and mental function, and that people can often have very high mental function even when their brains are greatly damaged. As a scientific paper says, “There does not appear to be a direct relationship between the degree of brain pathology or brain damage and the clinical manifestation of that damage.”

Such cases are not at all compatible with the conventional thinking of neuroscientists that the human mind is merely the product of the brain. But such cases are compatible with the assumption that the human mind is mainly the product of some mysterious reality beyond our understanding: a soul or some cosmic consciousness infrastructure much greater than a human body.

But a mainstream might argue that we should believe our memories are all stored in our brains, on the grounds that brains are active when we are remembering, and very heavy brain damage may be associated with memory loss. The visual below illustrates why such
reasoning is not convincing. 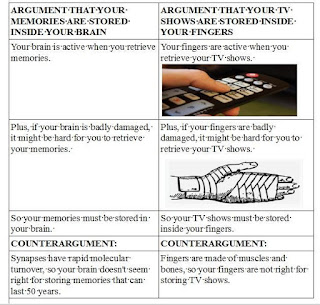