Scientists have long advanced the dogma that memories can only be stored in brains. But there is a line of experiments that challenge such a dogma. The experiments involve worms. The worms in question have an astonishing ability. You can cut off the head of one of these worms, and it will grow a new head.

In the 1950's the scientist James McConnell did astonishing experiments with flatworms. He trained flatworms (planaria) to respond to lighting cues. He then cut off the heads of the flatworms, leaving only half a worm. He was not surprised to see the tail of the worm regrow into a full worm that included a new brain. Such a thing had been observed long ago. But what was surprising was that the worms seemed to remember the learning that had previously been provided. Under the prevailing dogma of neuroscience – that all memories are stored in the brain – such a thing should have been impossible. The learning should have been lost when a worm's first brain was cut off. McConnell's research was published in a peer-reviewed scientific journal. The paper stated, “ It was concluded that in planaria the rudimentary brain is necessary for learning to take place but not for retention of the learned response." 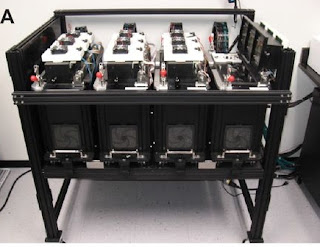 Levin's results were similar to McConnell's. The sequence he documented over and over again was:

Levin published his research in a peer-reviewed scientific journal. The paper was entitled, “An automated training paradigm reveals long-term memory in planarians and its persistence through head regeneration.”

It is impossible to explain these results under prevailing dogmas that memories are stored in brains. An article on Levin's research includes some weird speculation involving RNA molecules going from the head of the flatworm into the tail, and then migrating back into the head after the head had regenerated after decapitation. But the article concedes that this scenario is “imaginary,” and scientists haven't even maintained that memories are stored in RNA molecules.

But there is a scenario that can explain experimental results such as McConnell's and Levin's. Consider the following hypothetical scenario.

The experimental results of McConnell and Levin are inconsistent with the idea that memories are stored only in brains, but are quite consistent with the scenario above.  These experiments should come as no surprise to anyone who has studied the research of Karl Lashley. Lashley spent years doing experiments with a variety of animals to determine how much memory was affected by removal or damage to parts of the brains. He found many examples of animals remembering things well even after large parts of their brains had been removed. See the beginning of this post for some examples.

Are there any other experiments hinting at the existence of a soul? Yes, but they involve not animals but human beings. The experiments I refer to are experiments involving ESP and remote-viewing. Innumerable scientific papers have been published documenting positive results in such experiments. In the case of the Joseph Rhine experiments at Duke University, we have experiments showing spectacular results that we would not expect to see merely by chance even if everyone on the planet was tested for ESP.

What do such experiments have to do with the soul? Abilities such as ESP and remote viewing are utterly inexplicable under a neurological framework. Evidence for such abilities suggests very strongly that the human mind involves some paranormal or spiritual or transcendent component that goes beyond anything that can be explained by using the nervous system and the brain. The term “soul” can be used as a vague term for such a component.

Of course, you can deny all of this if you wish to cling to materialist dogmas about the brain, and maintain that the mind and memories are 100% brain effects. But life is going to be hard for you. You must explain away or deny the worm experiments done by multiple researchers. You must explain away or deny tons of experiments showing paranormal human abilities, experiments done for more than 100 years, including experiments done at leading universities and experiments long funded by the US government. You must deny all the evidence involving near-death experiences, suggesting that human consciousness can continue when the brain is inoperative, including many cases of people verifying details of their medical procedures when they should have been completely unconscious. You must claim that memories are all stored in brains, even though there is no plausible mechanism by which human brains could store memories for longer than a year or two, given all the structural and protein turnover occurring in synapses (discussed here). You must somehow claim that memory recall is purely neurological, even though no one has the slightest idea of how a brain or mind could ever know how to find the exact location in the brain where a memory was stored. You must also maintain that somehow all our abstract thoughts are made by neurons, although no one can explain how one neuron or a trillion neurons could combine to make an abstract concept such as “life,” “universe,” or “nation.” You must also maintain that somehow the brain is constantly using a vast wealth of encoding schemes and decoding schemes that allow it to translate concepts, episodic memories and visual memories into molecular storage, even though no one has ever found such an encoding scheme, no one has ever spelled out in detail how such encoding schemes could work, and if such encoding schemes existed they would require some insanely intricate design scheme almost infinitely more complicated than the design scheme behind DNA (creating a gigantic “intelligent design” issue materialists would prefer to avoid). You must also explain away cases such as John Lorber's and these cases, which suggest that minds can function very well even when a large fraction of the brain is damaged or a great majority of the brain is gone.

Good luck doing all that without tying your prose into knots.
at April 07, 2018