Item # 2: An Application to Store and Retrieve Data

While it is possible to store a small amount of data on a computer merely using a nerdy command-line string of characters, almost no one does that to store text data. Instead, 99% of the time someone will use an application to store data. An application is a program that does some specific type of work, typically by leveraging the functionality in the operating system. A person using a Windows operating system might use an application program such as Notepad, Wordpad, or Microsoft Word to store text data.

Text is never directly written to a file stored on your computer's hard drive or a zip-drive. If, for example, you were to break apart your computer's hard drive (or break apart a small zip drive), and look at its contents in a high-magnification microscope, you would never see little tiny “a,” “b,” and “c” characters. What actually happens when your text data is stored is this: (1) the ASCII code is used to convert each of your text characters into a number; (b) those numbers are then converted from decimal into binary; (c) the binary information is then stored on your computer's hard drive or a zip drive. The ASCII code consists of a table in which each character is represented by a number.

Does the brain have anything like this? As far as we know, it does not. The ASCII code is an example of an encoding protocol, and no one has ever been able to discover any encoding protocol used by the brain to store information.

Item # 4: A Decimal to Binary Conversion Table or Utility

The ASCII code merely converts letter to decimal numbers, numbers that use the Base 10 system. But computers store information using binary code, and when binary is used, numbers are stored using the Base 2 system. So rather than directly writing text represented in the ASCII code, an application must convert from decimal to binary.

This is another encoding protocol that does not correspond to any functionality known to exist in the brain.

Item # 5: A Medium That Allows a Permanent, Stable Storage of Information

Does the brain have anything like this – some medium allowing a permanent, stable storage of information? It would seem not, at least nothing that could be used by the brain to store memories that last for years. The main assumption during the past decades has been that memories are stored in synapses. But synapses are an unstable “shifting sands” type of medium subject to high molecular turnover and structural turnover. As discussed earlier, rapid molecular turnover in synapses should make them unsuitable for storing memories that last longer than a year. But humans are able to remember many memories for 50 years or longer. As a scientific paper puts it:

Experience-dependent behavioral memories can last a lifetime, whereas even a long-lived protein or mRNA molecule has a half-life of around 24 hrs. Thus, the constituent molecules that subserve the maintenance of a memory will have completely turned over, i.e. have been broken down and resynthesized, over the course of about 1 week.

The DNA inside neurons is a stable medium for permanent information storage, but it doesn't seem to be used for storing our memories. Our DNA has been exhaustively studied by projects such as the Human Genome Project and the Encode project. No one has discovered the memories of any particular human in that human's DNA.

Item # 6: A Storage Location System by Which the Exact Position of a Data Item Can be Specified, Allowing Fast Retrieval from an Exact Location

When a computer stores data on a hard drive or zip file, it's not similar to adding to a heap, something similar to pouring another cup of water in a swimming pool full of water. It's always rather like putting some new papers in a particular file of a filing cabinet. This is so that information can be retrieved rapidly. You can get papers from a file in a file cabinet quickly, but it would take you way too long to get that information if you just had some giant heap of papers in the middle of your office.

Does the brain have any type of similar system for storing information in specific named locations? As far as we know, it does not. It's hard to conceive of how such a thing could possibly exist in the brain. The brain is more like a tower-sized ball of tangled spaghetti than some city with labeled streets. There seems to be no way in which a brain could ever know exactly where some data was that it was storing. Neurons don't have any coordinate system allowing anything to tell a precise location in the brain. If your brain somehow wrote some information to a brain position of X=2345, Y=24342, Z=73252, there would be no way for the brain to record that exact position in a way that would allow that exact location to be quickly accessed. Writing some information to the brain would seem to be like writing on some index card, and throwing it into the middle of an Olympic-sized swimming pool full to the brim with index cards. Under such a setup, instantaneous retrieval of some precise information should be impossible.

Item 7: Read/Write Functionality Allowing Data to Be Written to a Specific Location and Also Read From the Same Location

The discussion under Item #6 above was purely a discussion of an organizational system in which some data can be given a location for it to be stored. A separate requirement is that data can be written to a storage medium, and also read from that storage medium. The reading and the writing must occur in a very consistent way, so that the data read is exactly the same as the data written.

Your computer has one or more systems capable of such read/write functionality. For example, a hard disk in a computer is a read-write device. There is complicated hardware involved. There is a read-write arm which can move back and forth in a particular line, and also a spinning disk underneath that arm. At the end of the read-write arm is a read-write head that can read data when it is above some particular location. With the combination of these two things, the system can read and write from any desired location on the disk. 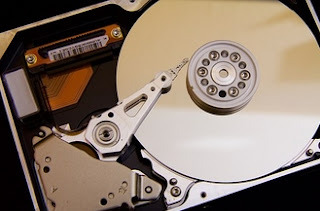 A read-write head of a hard drive

Does the brain have any such read-write functionality? Some think that what is called long-term potentiation acts like a write system for storing memories. But the term long-term potentiation is very misleading. Long-term potentiation (LTP) is actually a very short-lived effect, almost always lasting less than a few weeks. The brain may have some kind of system for writing something that will last a short time, rather comparable to someone writing in the wet beach sand with his fingers. But there is no known write mechanism by which the brain could permanently store data.

When it comes to read functionality, we know of no mechanism at all for such a thing. There seems to be absolutely nothing in the brain similar to the read-write head of a hard disk, something that might allow the brain to “zoom in” and read from one particular location. A system has to be organized in a very specific way for read-write functionality to be possible, and the brain seems to be organized in no such way.

Our neuroscientists tend to dogmatically speak as if our memories are all stored in brains, but this is more of an ossified dogma rather than a truth determined by observations. Neuroscience itself undermines such a doctrine, by indicating that there is no stable component that the brain could be using to store memories lasting decades. Comparing the brain to a computer, we find that the brain has nothing like any of the 7 main things that the computer uses to store and retrieve data. But our minds recall obscure information instantly, and a single phrase may get you to instantly recall some old tune you have not heard in 50 years (as recently happened to me).

The discussion above should be very discouraging to anyone who hopes to explain how brains could achieve the memory capabilities of human minds. To such a person I must merely say: you're barking up the wrong tree. The feats of our minds cannot be explained solely in terms of the brain. We must postulate some psychic or spiritual component to account for the feats of our minds, something beyond the brain. Such a thing is needed to account for the wonders of psychic phenomena, and is also needed to account for the ordinary marvels of the human mind such as the instantaneous recall of childhood memories.

We may imagine the following conversation between a curious young boy and a distracted mother walking on the street.

We can also imagine a similar conversation between a philosopher and a neuroscientist.

Philosopher: From whence comes that hint of the transcendent we feel when we look at a sky ablaze with stars? From where do our loftiest ethical principles arise? Why do we lie awake and ponder the weightiest riddles of existence? How do we ever grasp the most abstract notions such as the idea of the universe and the eternal laws of nature?

Such simplistic answers are convenient, but should we not suspect such complex questions have equally complex answers?
at April 02, 2018