Candid Confessions of the Cognitive Experts

To have some type of intellectual respectability, the person claiming that minds come from brains must have some type of semi-specific claim about where human memories are stored in the brain. It won't do for such a person to be totally vague about the topic. For example, the doctrine that minds come from brains would have little credibility if its advocates talked like this:

Of course, talk like that sounds quite scatterbrained, so it's better if a theorist has a more specific answer to the question of how a brain stored memories. For a few decades, a stock answer has been given by neuroscientists: they have generally claimed memories are stored in synapses. Synapses are junctions between nerve cells in the brain.

But there is a great problem with this stock answer. Human memories are known to last for more than 50 years, but synapses are not a stable platform for the storage of information. The standard tale told by neuroscientists has been that memories are stored as changes in the strengths of synapses, what are called synaptic weights. But the things that make up such synaptic weights are protein molecules that have a very short lifetime. The protein molecules in synapses have a lifetime of no longer than a few weeks (this paper finds that they turn over at a rate of about 17% per day).

In November 2016 there appeared a scientific paper that substantiates a good deal of my reasoning. The paper by Patrick C. Trettenbrein is entitled “The Demise of the Synapse As the Locus of Memory: A Looming Paradigm Shift?” It can be found here.

Below are some excerpts:

When we are looking for a mechanism that implements a read/write memory in the nervous system, looking at synaptic strength and connectivity patterns might be misleading for many reasons...Tentative evidence for the (classical) cognitive scientists' reservations toward the synapse as the locus of memory in the brain has accumulated....Changes in synaptic strength are not directly related to storage of new information in memory....The rate of synaptic turnover in absence of learning is actually so high that the newly formed connections (which supposedly encode the new memory) will have vanished in due time. It is worth noticing that these findings actually are to be expected when considering that synapses are made of proteins which are generally known to have a short lifetime...Synapses have been found to be constantly turning over in all parts of cortex that have been examined using two-photon microscopy so far...The synapse is probably an ill fit when looking for a basic memory mechanism in the nervous system.

So if memories are not stored in the synapses of your brains, where are they stored? Trettenbrein offers no answer. How can he, when there are no other places in the brain suitable for storing memories that could last for 50 years? I explained earlier why it is that other possibilities for memory storage such as DNA in neurons are not suitable explanations. We are familiar with cellular processes that read DNA during what is known as transcription, and we know that information from DNA is read many times too slow to account for the basically instantaneous speed with which humans retrieve memory.

Imagine a Broadway producer who discovers that his star cannot perform, but who has no understudy who can fill in. Such a producer is like a neuroscientist realizing that synapses aren't up to the job of explaining very long-term memories – there is no alternate part of the brain that can be called up to fill in the theoretical hole, like some understudy filling in the gap.

Trettenbrein gives this astonishingly frank and quite correct assessment: “To sum up, it can be said that when it comes to answering the question of how information is carried forward in time in the brain we remain largely clueless.” Such intellectual candor in a scientist is a refreshing change of pace.

Most neuroscientists believe that memories are encoded by changing the strength of synaptic connections between neurons....Nevertheless, the question of whether memories are stored locally at synapses remains a point of contention. Some cognitive neuroscientists have argued that for the brain to work as a computational device, it must have the equivalent of a read/write memory and the synapse is far too complex to serve this purpose (Gaallistel and King, 2009; Trettenbrein, 2016). While it is conceptually simple for computers to store synaptic weights digitally using their read/write capabilities during deep learning, for biological systems no realistic biological mechanism has yet been proposed, or in my opinion could be envisioned, that would decode symbolic information in a series of molecular switches (Gaallistel and King, 2009) and then transform this information into specific synaptic weights.

After then piling up a whole bunch of speculations to try to save the synaptic storage of memory hypothesis he would prefer to keep, Sossin confesses, "the concept of a memory synapse remains an unproven hypothesis."

We get some similar candor in a new book Why Only Us? Language and Evolution by the leading linguist Noam Chomsky and Professor Robert C. Berwick. Here is an excerpt (pages 50-51):

The very first thing that any computer scientist would want to know about a computer is how it writes to memory and reads from memory....Yet we do not really know how this most foundational element of computation is implemented in the brain.

The apparent impossibility of explaining how brains could store memories for 50 years is perhaps exceeded by the apparent impossibility of explaining how humans could instantly retrieve such memories. Neuroscientists don't even have any decent theory for this, and mainly just kind of shrug their shoulders when this puzzle is mentioned. The complete lack of any workable theory for how memory recall can occur so quickly is admitted by neuroscientist David Eagleman, who states:

Memory retrieval is even more mysterious than storage. When I ask if you know Alex Ritchie, the answer is immediately obvious to you, and there is no good theory to explain how memory retrieval can happen so quickly.

The 2017 paper here is entitled, "On the research of time past: the hunt for the substrate of memory."  It is a portrait of memory theorists in disarray, presenting no one theory about how memory might be stored in a brain, and instead suggesting seven or more possibilities, none of which is plausible. The paper is all over the map in its speculations, like someone shooting a gun in all different directions. Such theoretical incoherence has no more weight than someone listing 7 possible theories of where angels live. We are told, "Synaptic weight changes can now be excluded as a means of information storage." That shoots down the main theory that neuroscientists have been pushing for decades.  The paper then suggests speculation after speculation, without presenting any evidence for any of these speculations.

Whenever you hear someone try to describe as "science" the idea that minds come from brains or brains store your memories,  remember that claims passed off as "science" may occupy any spot in the pyramid below. 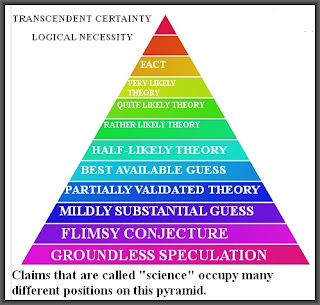 Email ThisBlogThis!Share to TwitterShare to FacebookShare to Pinterest
Labels: synapse theory of memory