In Neuroscience Papers Bluffing Is More Common Than Candor

The Cornell Physics Paper Server at arxiv.org is mainly useful for finding papers on physics, but it also includes many papers on quantitative biology and computer science. Below are some observations I made after searching for papers with "memory" or "thought" in the title.

Occasionally a neuroscience paper will have a little candor regarding the vast gulf between the claims neuroscientists make and the low-level data they observe. One paper gives us some indications that what neuroscientists observe on a low level is something totally different from the stability we see in long-term memories.  We read the following, in which "turn over" refers to demise and replacement:

"The building blocks of the brain are in constant flux at the subcellular, cellular and circuit level. Synaptic and non-synaptic proteins are mobile [1] and rapidly turn over on the scale of hours to days [2]. Individual synapses continuously change their size and strength both in vitro and in vivo [3–5]. Most notably, however, the mature brain appears to continuously rewire itself, even without experimental intervention [6,7]. This is evident from the perpetual turnover of dendritic spines, small protrusions from the parent dendrites of most cortical neurons that are commonly used as proxies for excitatory synapses. Depending on the cell types and brain regions investigated, dendritic spines are gained and lost at rates ranging from approximately 1% per day in primary visual cortex [8] over approximately 5% per day in the CA1 region of hippocampus [9] to up to approximately 15% per day in primary somatosensory cortex [10] (but see [6,11,12] for potential pitfalls of these quantifications)."

Another paper refers to it as a "fundamental enigma" that memories can last for even weeks (which is not surprising, given the facts above). Using the acronym LTM for long-term memory, the paper says, "A fundamental enigma is how the physical substrate for storage of LTM can nonetheless be preserved for weeks, months, or a lifetime."

The paper here suggests that there is no understanding of how a brain could ever translate episodic experience or learned knowledge into neural states. The paper errs only in using the term "largely" when it should have used the word "totally." We read this:

"Codifying memories is one of the fundamental problems of modern Neuroscience. The functional mechanisms behind this phenomenon remain largely unknown."

The paper "Long Term Memory: Scaling of Information to Brain Size" by Donald R. Forsdyke is a paper of unusual candor.  We read the following about patients whose brain regions consisted almost entirely of watery fluid rather than neurons:

"The journal Science, under the title 'Is your brain really necessary?' (Lewin 1980), described a series of 600 cases with residual ventricular enlargement that had been studied in Britain by paediatrician John Lorber (1915-1996). Again, while long-term memories were not directly assessed, intelligence quotients (IQs) were. Amazingly, in 60 of Lorber’s cases, ventricular fluid still occupied 95% of cranial capacity. Yet half of this group had IQs above average. Among these was a student with an IQ of 126 who had a first class honours degree in mathematics and was socially normal....The drastic reduction in brain mass in certain, clinically-normal, hydrocephalic cases, seems to demand unimaginable levels of redundancy and/or plasticity – superplasticity. How much brain must be absent before we abandon these explanations and look elsewhere?...Regarding the human brain’s 'massive storage capacity' for object details, Brady et al. (2008) have also challenged 'neural models of memory storage and retrieval.' ...The unconventional alternatives are that the repository is external to the nervous system, either elsewhere within the body, or extra-corporeal. The former is unlikely since the functions of other body organs are well understood. Remarkably, the latter has been on the table since at least the time of Avicenna and hypothetical mechanisms have been advanced (Talbot 1991; Berkovich 1993; Forsdyke 2009; Doerfler 2010). Its modern metaphor is 'cloud computing.' ”

But such candor and willingness to challenge fossilized dogmas is rare. What is more common is for neuroscience papers to give us bluffing, in which an author pretends to have something he doesn't have, like a poker player with a weak hand acting as if he has a royal flush.  An example is the paper "Neural origins of self-generated thought: Insights from intracranial electrical stimulation and recordings in humans."  The paper would have us believe that it is presenting some evidence that brains produce thinking. 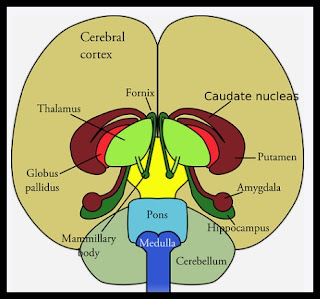 Below are some other examples of weak elements in the "Memory Systems of the Brain" paper:
(1) We are told on page 15 that neuroimaging shows that certain regions of the brain show "common activity" when memories are formed. This is irrelevant, because all regions of the brain are active during normal consciousness.
(2) We are told on page 18 that a paper showed "increased activity in the amygdala" for those who learned better. The paper in question actually only showed that those with higher levels of stress hormones in the amygdala tended to remember more.  But that does nothing to show that the amygdala stores memories, but merely shows we remember better when emotionally aroused. You could do a similar test showing that people remember more what they experience when their heart rate is 130 beats per minute rather than a normal rate of only 65 beats per minute.  But that would do nothing to show that memories are stored in the heart.
(3) On page 14 we are told, "Imaging studies have also illuminated the contributions of distinct prefrontal regions to encoding and retrieval."  At the end of this statement there is a reference to three papers. The first of these papers used only 6 subjects per experiment, way too small a sample size to be a reliable result (15 subjects per study group has been suggested as a minimum for reliable results, and Kelly Zalocusky PhD hints that 31 subjects per study group may be needed). The second of these papers suffered from the defect of judging strength of memory based on subjective "confidence levels" rather than objective accuracy, and also the very large defect of failing to specify how many subjects were used for the experiments (we are told 14 subjects gave their permission to be tested, but not told how many subjects actually participated; and the graphs suggest that maybe only half that many participated). The third of the papers presents no original research.
Containing some very dubious assertions, some references to weak research and some troubling omissions (such as no mention of the supremely relevant research of John Lorber or the short lifetimes of synapse proteins), the paper "Memory Systems of the Brain" is an example of a bluffing neuroscience paper (in the sense that its title suggests something the paper does not deliver). The author does nothing to describe a system of the brain capable of encoding memories. He does nothing to describe a system in the brain capable of storing memory information. He does nothing to describe in the brain a system capable of preserving memory information for decades. He does nothing to describe a system in the brain capable of retrieving memories. So he does not describe any such thing as a memory system in the brain.  Nature never told us that brains store memories; it was merely neuroscientists who told us that, without any good evidence for such a claim.
at September 06, 2020