Common Experiences That Show the Untruth of Professorial Memory Claims

Scientists have an "ivory tower" dogma about memory formation that is contradicted by much of human experience. The dogma is that you cannot instantly form a long-term memory.  The reason why scientists believe this very silly notion has to do with their groundless theory that memories are stored in brains through the strengthening of synapses. The strengthening of synapses would require the synthesis of new proteins, which requires minutes.

So a neuroscientist will typically claim that you can't instantly acquire a permanent long-term memory, an idea that is sometimes called the theory of consolidation. They will claim that if you learn something just once, or see it just once, it will only exist in short-term memory, and quickly fade away. They will claim that repeated exposures are required of some thing to be learned, and that over the length of these repeated exposures, there will be time for synapses to be strengthened through protein synthesis.

A statement of this theory of memory consolidation appeared recently in an MIT press release, making claims I debunk here. In the press release we read this:

“'The formation and preservation of memory is a very delicate and coordinated event that spreads over hours and days, and might be even months — we don’t know for sure,' Marco says. 'During this process, there are a few waves of gene expression and protein synthesis that make the connections between the neurons stronger and faster.' ”

Such a dogma is described like this in a scientific paper, which attributes to "common sense" something that is actually contrary to common sense and common experience:

"Common sense believes that long-term memory (LTM) is difficult to form for it requires repeated efforts for acquiring. The consolidation theory suggests that LTM needs hours to convert labile memory to LTM. This process requires the synthesis of new proteins that supports long-lasting changes in synaptic morphology." 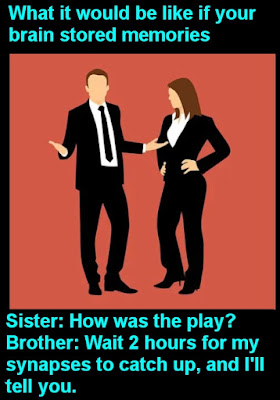 I could cite some animal studies that contradict such claims. But there would be no point in doing so, for we do not need any peer-reviewed scientific studies to prove that humans commonly form long-term new memories instantly. There is an abundance of very common human experience that can be cited to prove that humans routinely form new long-term memories instantly.

Let us consider the simple case of a diary writer who has the habit of writing down in his diary before he goes to bed the events of the day.  Such a diary writer will have no trouble recalling all the important events that happened during the day, even events that he has not reviewed in his mind after they happened. Under the classification system used by psychologists, memories of things that happened twelve hours ago are long-term memory, and only memories of events within the past few minutes are short-term memory.

Consider also the case of a store owner. He sees a customer he may have seen a few days ago, only briefly, for the first time. Upon seeing the customer the second time a few days or weeks later, he may say, "Good to see you again." Such a store owner has formed a long-term memory after only a single brief encounter with a person.

It is a fact of human experience that humans can form long-term memories after listening to a teacher describe a historical incident only one time.  For example, after you heard your history teacher describe for the first time the assassination of Abraham Lincoln or Julius Caesar or John Kennedy, you probably remembered such stories long enough to pass a test in that class a few days or weeks later; and there is a good chance you remembered such accounts for years.  It was not necessary for the teacher to tell the stories two or three times for you to form a long-term memory of them.

An extremely common example of the instant formation of long-term memories is how we remember movies and TV shows we have already seen. Imagine you see a particular movie on television for the first time.  If you were paying attention while watching, you will instantly form a long-term memory of the events in that movie.  Then a few months or years later you may see the movie showing again on TV, which frequently has repeat showings of movies and TV shows.  What will you typically do when you find the TV showing that old movie you saw a few months or years ago? If you particularly enjoyed the movie, you may want to watch it again. But more commonly, you will just change the channel, thinking to yourself, "I've already seen that one."

Why do you do that? It's because you remember the story of the movie, after having seen it only one time. So you change the channel, because you want to see some fresh never-before-seen story rather than some story you remember.  This would never happen if the dogmas of neuroscientists were true. If it required minutes for you to synthesize a protein to strengthen synapses in order to form a memory, you would never be able to remember things in a movie at the speed at which a movie or TV show is displayed.

You can do a test to refute claims that it takes many minutes for you to form long-term memories. Five minutes after you finish watching a movie (which is longer than the maximum retention time attributed to short-term memory), ask yourself to orally tell what happened in the movie. You will be able to recount the whole story if you paid attention while watching it.  There will not at all be any "catch-up" effect in which you start to remember the movie's story better a half an hour or hours later after your synapses and proteins have caught up in their storage work. This is because you aren't actually storing memories through protein synthesis or synapse strengthening.  There is no real evidence for a brain storage of memories. You remember things just as if your brain had no involvement, and you can instantly form a permanent new memory when something important happens.  When someone slaps you hard on your face, you will instantly form a vivid permanent new memory.  You do not require repeated slaps for you to remember being slapped. 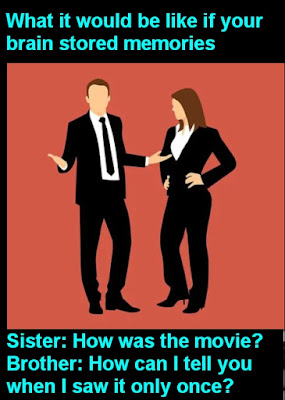 Brain proteins have an average lifetime of less than two weeks. Your brain replaces its proteins at a rate of about 3% per day, and you wouldn't remember things more than a month or two if your brain was storing memories. But people like me have very good memories of trivial things they saw 50 years ago. The other day I was watching an episode of the old "Columbo" TV series from the early 1970's. I correctly identified the full names of an actor and actress that were guest stars, both people I hadn't seen on TV in many years. Then I saw the face of a very little-known actor I haven't seen anywhere in almost 50 years. Very quickly I correctly identified that his first name was John, and that he had played a role in a short-lived TV show canceled in 1971. I quickly remembered the full names of two of the actresses in that short-lived TV show never shown after its cancellation in 1971, and also the name of the show.  One of these actresses was one I hadn't seen on TV or in the movies for  nearly 50 years. There was no memory consolidation involved in the preservation of such memories, involving persons I haven't seen or recalled in countless years.  While watching another "Columbo" episode, I saw Joyce Van Patten, who I remembered as the co-star of some series with Bob Denver, some TV series involving a diner. I hadn't seen the series ("The Good Guys") or read a word about it or thought about it since its cancellation in 1970. No one would have such 50-year memory retention of obscure things if your memories were stored in a brain that replaces its proteins at a rate of 3% per day, and no one would be able to recall such very obscure facts instantly if memories were stored in the brain (something without anything such as indexing allowing fast retrieval).

The idea that repeated exposures are required for permanent memory formation is nonsense contrary to a large-fraction of human experience.  The only reason neuroscientists spout this nonsense is that they have committed themselves to some theory of neural memory storage. When I hear a PhD speaking the obvious nonsense that humans require repeated exposures of sensory information to have long-term memories of things, it's one of those times when I say to myself, "It takes a professor to be that blind." Isolated in some ivory tower ideological enclave in which adherence to group belief tenets is regarded as mandatory, a professor may start to believe things that make no sense and are contrary to abundant human experience.  He then may end up making some obviously false claim that would never be made by a truck driver or a plumber or anyone else who had not been so conditioned by academia groupthink.