Brain Dogmas Versus Case Histories That Refute Them

Our neuroscientists have the bad habit of frequently spouting dogmas that have not been established by observations. We have all heard these dogmas stated hundreds of times, such as when neuroscientists claim that memories are stored in brains, and that our minds are produced by our brains. There are actually many observations and facts that contradict such dogmas, such as the fact that many people report their minds and memories still working during a near death experience in which their brains shut down electrically (as the brain does soon after cardiac arrest).

One of the most dramatic type of observations conflicting with neuroscience dogmas is the fact that memory and intelligence is well-preserved after the operation called hemispherectomy. Hemispherectomy is the surgical removal of half of the brain. It is performed on children who suffer from severe and frequent epileptic seizures.

In a scientific paper “Discrepancy Between Cerebral Structure and Cognitive Functioning,” we are told that when half of their brains are removed in these operations, “most patients, even adults, do not seem to lose their long-term memory such as episodic (autobiographic) memories.” The paper tells us that Dandy, Bell and Karnosh “stated that their patient's memory seemed unimpaired after hemispherectomy,” the removal of half of their brains. We are also told that Vining and others “were surprised by the apparent retention of memory after the removal of the left or the right hemisphere of their patients.”

On page 59 of the book The Biological Mind, the author states the following:

A group of surgeons at Johns Hopkins Medical School performed fifty-eight hemispherectomy operations on children over a thirty-year period. "We were awed," they wrote later of their experiences, "by the apparent retention of memory after removal of half of the brain, either half, and by the retention of the child's personality and sense of humor."

In the paper "Neurocognitive outcome after pediatric epilepsy surgery" by Elisabeth M. S. Sherman, we have some discussion of the effects on children of temporal lobectomy (removal of the temporal lobe of the brain) and hemispherectomy, surgically removing half of the brain to stop seizures. We are told this:

After temporal lobectomy, children show few changes in verbal or nonverbal intelligence....Cognitive levels in many children do not appear to be altered significantly by hemispherectomy. Several researchers have also noted increases in the intellectual functioning of some children following this procedure....Explanations for the lack of decline in intellectual function following hemispherectomy have not been well elucidated.

Referring to a study by Gilliam, the paper states that of 21 children who had parts of their brains removed to treat epilepsy, including 10 who had surgery to remove part of the frontal lobe, "none of the patients with extra-temporal resections had reductions in IQ post-operatively," and that two of the children with frontal lobe resections had "an increase in IQ greater than 10 points following surgery."

Some try to explain these results as some kind of special ability of the child brain to recover. But there are similar results even for adult patients. The page here mentions 41 adult patients who had a hemispherectomy. It says, “Forty-one patients underwent additional formal IQ testing postsurgery, and the investigators observed overall stability or improvement in these patients,” and notes that “significant functional impairment has been rare.”

Of these cases of successful hemispherectomy, perhaps none is more astonishing than a case of a boy named Alex who did not start speaking until the left half of his brain was removed. A scientific paper describing the case says that Alex “failed to develop speech throughout early boyhood.” He could apparently say only one word (“mumma”) before his operation to cure epilepsy seizures. But then following a hemispherectomy (also called a hemidecortication) in which half of his brain was removed at age 8.5, “and withdrawal of anticonvulsants when he was more than 9 years old, Alex suddenly began to acquire speech.” We are told, “His most recent scores on tests of receptive and expressive language place him at an age equivalent of 8–10 years,” and that by age 10 he could “converse with copious and appropriate speech, involving some fairly long words.” Astonishingly, the boy who could not speak with a full brain could speak well after half of his brain was removed. The half of the brain removed was the left half – the very half that scientists tell us is the half that has more to do with language than the right half.

We learn of quite a few such cases in the scientific paper "Long-Term Memory: Scaling of Information to Brain Size" by Donald R. Forsdyke of Queens University in Canada.  He quotes the physician John Lorber on an honors student with an IQ of 126:

Instead of the normal 4.5 centimetre thickness of brain tissue between the ventricles and the cortical surface, there was just a thin layer of mantle measuring a millimeter or so. The cranium is filled mainly with cerebrospinal fluid. … I can’t say whether the mathematics student has a brain weighing 50 grams or 150 grams, but it’s clear that it is nowhere near the normal 1.5 kilograms.

Forsdyke notes two similar cases in more recent years, one from France and another from Brazil.

Cases like this make a mockery of scientist claims to understand the human brain. When scientists discuss scientific knowledge relating to memory, they almost never discuss the most relevant thing they could discuss, the cases of high brain function after hemispherectomy operations in which half of the brain is removed. Instead the scientists cherry-pick information, and describe a few experiments and facts carefully selected to support their dogmas, such as the dogma that brains store memories, and brains make minds. They also fail to discuss the extremely relevant research of John Lorber, who documented many cases of high-functioning humans who had lost almost all of their brain due to hydroencephaly. 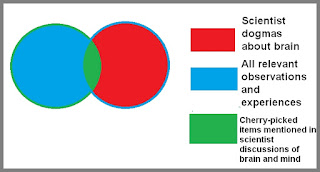 A scientist discussing memory will typically refer us to experiments involving rodents. Such experiments are almost always studies with low statistical power, because the experimenter failed to use at least 15 animals per study group, the minimum needed for a moderately reliable result with a low risk of a false alarm. There will be typically be some graph showing some measurement of what is called freezing behavior, when a rodent stops moving. The experimenter will claim that this shows something was going on in regard to memory, although it probably does not show such a thing, because all measurements of a rodent's degree of freezing are subjective judgments in which an experimenter's bias might have influenced things. There will often be claims that a fear memory was regenerated by electrically zapping some part of the brain where the experimenter thought the memory was stored. Such claims have little force because it is known that there are many parts of a rodent's brain that will cause a rodent to stop moving when such parts are electrically stimulated. And, of course, rodent experiments prove nothing about human memory, because humans are not rodents.

When a scientist discusses memory research, he will typically discuss the case of patient HM, a patient who was bad at forming new memories after damage to the tiny brain region called the hippocampus. Again and again, writers will speak as if this proves the hippocampus is crucial to memory. It certainly does not. The same very rare effect of having a problem in forming new memories cropped up (as reported here) in a man who underwent a dental operation (a root canal). The man had no brain damage, but after the root canal he was reportedly unable to form new memories. Such cases are baffling, and the fact that they can come up with or without brain damage tells us no clear tale about whether the hippocampus is crucial for memory. The hemispherectomy cases suggest that the hippocampus is not crucial for memory, for each patient who had a hemispherectomy lost one of their two hippocampuses, and overall there was little permanent effect on the ability to form new memories.

A scientific paper tells us that “lesions of the rodent hippocampus do not produce reliable anterograde amnesia for context fear,” meaning rodents with a damaged hippocampus can still produce new memories. The paper also tells us, “These data suggest that the hippocampus is normally involved in context conditioning but is not necessary for learning to occur.” So it seems that the main claim that neuroscientists cite to persuade us that they have some understanding of a neural basis for memory (the claim that the hippocampus is “crucial” for memory) is really a factoid that is not actually well established.

Postscript: The case of patient HM has been cited innumerable times by those eager to suggest that memories are brain based. Such persons usually tell us that patient HM was someone unable to form any new memories.  But a 14-year follow-up study of patient HM (whose memory problems started in 1953) actually tells us that HM was able to form some new memories. The study says this on page 217:

In February 1968, when shown the head on a Kennedy half-dollar, he said, correctly, that the person portrayed on the coin was President Kennedy. When asked him whether President Kennedy was dead or alive, and he answered, without hesitation, that Kennedy had been assassinated...In a similar way, he recalled various other public events, such as the death of Pope John (soon after the event), and recognized the name of one of the astronauts, but his performance in these respects was quite variable.

The study also says that patient HM was able to learn a maze (although learning it only very slowly),  and was able eventually to walk the maze three times in a row without error.
at November 18, 2018