There have been many studies of how a brain looks when particular activities such as thinking or recall occur. Such studies will typically attempt to find some region of the brain that shows greater activity when some mental activity occurs. No matter how slight the evidence is that some particular region is being activated more strongly, that evidence will be reported and reported as a “neural correlate” of some activity.
But rather than focusing on a question such as “which brain region showed the most difference" during some activity, we should look at some more basic and fundamental questions. They are:

If you were to ask the average person by how much brain activity increases during some activity such as problem solving or recall, he might guess 25 or 50 percent, based on all those visuals we have seen showing brain areas “lighting up” during certain activities. But as discussed here, such visuals are misleading, using a visual exaggeration technique that is essentially “lying with colors.” The key term to get a precise handle of how much brain activity increases is the term “percent signal change.” While the visual and auditory cortex regions of the brain (involved in sensory perception) may increase by much more than 1 percent, this technical document tells us that “cognitive effects give signal changes on the order of 1% (and larger in the visual and auditory cortices).” A similar generalization is made in this scientific discussion, where it says, based on previous results, that “most cognitive experiments should show maximal contrasts of about 1% (except in visual cortex)."

A PhD in neurophysiology states the following:

Those beautiful fMRI scans are misleading, however, because the stark differences they portray are, in fact, minuscule fluctuations that require complex statistical analysis in order to stand out in the pictures. To date, the consensus is that "thinking" has a very minor impact on overall brain metabolism.


These studies can be summarized like this: during memory recall and thinking or problem solving, the brain does not look any different, and does not work any harder. The tiny differences that show up in these studies are so small they can be characterized as “no significant difference.” You certainly wouldn't claim that an employee was working harder on some day in which you detected that he merely expended a half of one percent more energy, by working two minutes longer on that day. And we shouldn't say the brain is working harder merely because it was detected that some part used only half of one percent more energy, only one part in 200.

As for whether the brain looks different during thinking or memory recall, based on the numbers in the studies above, it would seem that someone looking at a real-time fMRI scanner would be unable to detect a change in activity when someone was thinking or recalling something. Brain scan studies have the very bad habit of giving us “lying with color” visuals that may show some region of the brain highlighted in a bright color, when it merely displayed a difference of activity of about 1 part in 200. But the brain would not look that way if you looked at a real-time fMRI scan of the brain during thinking. Instead, all of the regions would look the same color (with the exception of visual and auditory cortex regions that would show a degree of activity corresponding to how much a person was seeing or hearing). So we can say based on the numbers above that the brain does not look different when you are thinking or recalling something.

A 1 percent difference cannot even be noticed by the human eye. If I show you two identical-looking photos of a woman, and ask you whether there is any difference, you would be very unlikely to say "yes" if there was merely a 1% difference (such as a width of 200 pixels in one photo and a width of 202 pixels in the second photo). So given the differences discussed above (all 1 percent or less, and most less than half of one percent), it is correct to say that brains do not look different when they are thinking or remembering.

The relatively tiny variation of the brain during different cognitive activities is shown by the graph below, which helps to put things in perspective. The graphed number for the brain (.5 percent) is just barely visible on the graph. 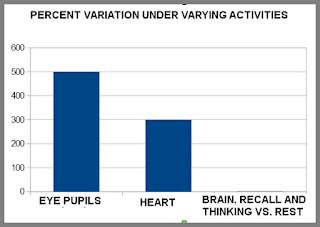 When you run, the heart gives a very clear sign that it is involved, and a young man running very fast may have his heart rate increase by 300%. The pupil of the eye gives a very clear sign that it is involved with vision, because the pupil of the human eye changes from a size of 1.5 millimeters to 8 millimeters depending on how much light is coming into the eye. That's a difference of more than 500%.  But when you think or remember, the brain gives us no clear sign at all that the brain is the source of your thoughts or that memories are being stored or retrieved from the brain.  The tiny variations that are seen in brain scans are no greater than we would expect to see from random variations in the brain's blood flow, if the brain did not produce thought and did not store memories. You could find the same level of variation if you were to do fMRI scans of the liver while someone was thinking or remembering.

Concerning glucose levels in the brain, an article in Scientific American tells us that a scientist "remains unconvinced that any one cognitive task measurably changes glucose levels in the brain or blood." According to a scientific paper, "Attempts to measure whole brain changes in blood flow and metabolism during intense mental activity have failed to demonstrate any change." Another paper states this: "Clarke and Sokoloff (1998) remarked that although '[a] common view equates concentrated mental effort with mental work...there appears to be no increased energy utilization by the brain during such processes' (p. 664)."

The reality that the brain does not work harder and does not look different during thinking or recollection may be shocking to those who have assumed that the brain is the source of thinking and the storage place of human memories. But to those who have studied the numerous reasons for rejecting such dogmas, this reality will not be surprising at all. To a person who has studied and considered the lack of any viable theory of permanent memory storage in the brain (discussed here), and the lack of any viable theory of how a brain could instantly retrieve memories (discussed here), and the lack of any theory explaining how a brain could store abstract thoughts as neuron states,  it should not be surprising at all to learn that brains do not work harder or look different when you are thinking or recalling.  The facts discussed here conflict with the dogmas that brains generate thoughts and store memories. If the brain did such things, we would expect brains to work harder during such activities.

We know for sure that there is a simple type of encoding that goes on in human cells: the encoding needed to implement the genetic code, so that nucleotide base pairs in DNA can be successfully translated into the corresponding amino acids that combinations of the base pairs represent.  To accomplish this very simple encoding,  the human genome has 620 genes for transfer RNA.  But imagine if human brains were to actually encode human experiential and conceptual memories, so that such things were stored in brains. This would be a miracle of encoding many, many times more complicated than the simple encoding that the genetic code involves. Such an encoding would require thousands of dedicated genes in the human genome. But the human genome has been thoroughly mapped, and no such genes have been found.  This is an extremely powerful reason for rejecting the dogma that brains store human experiential and conceptual memories.

A good rule to follow is a principle I call "Nobel's Razor." It is the principle that you should believe in scientific work that has won Nobel prizes, but often be skeptical of scientist claims that do not correspond to Nobel prize wins.  No scientist has ever won a Nobel prize for any work involving memory, or any work backing up the claim that brains generate thoughts or store memories.

Postscript: If you do a Google search for "genes for memory encoding," you will see basically no sign that any such things have been discovered, other than one of those hyped-up press stories with an inaccurate headline of "100 Genes Linked to Memory Encoding." The story is referring to a scientific study described by this paper, entitled "Human Genomic Signatures of Brain Oscillations During Memory Encoding." The very dubious methodology of the authors was to get data on gene expression, and try to see how much it correlated with oscillations in brain waves.  Out of more than 10,000 genes studied, the authors have found about 100 which they claim were correlated with these brain wave oscillations. They state, "We were successful in identifying over 100 correlated genes and the genes identified here are among the first genes to be linked to memory encoding in humans." But the correlations reported are weak, with most of these 100 genes correlating no more strongly than .1 or .2 (by comparison, a perfect correlation is 1.0, and a fairly strong correlation is .5). The results reported do not seem any stronger than you would expect to get by chance. We would expect that even if there was no causal relation between gene expression and brain waves, that if you compared gene expression in more than 10,000 genes to brain waves, you might find purely by chance a tiny fraction such as 1% of the genes that would look weakly correlated to brain waves (or any other random data, such as stock market ups and downs).   In one of the spreadsheet tables you can download from the study,  there is a function listed for each of these roughly 100 genes, and in each case it's a function other than memory encoding. So such genes cannot be any of the thousands of dedicated genes that would have to exist purely for the sake of translating complex conceptual, verbal, and episodic memories into neural states, and vice versa, if a brain stored memories. No such genes have been identified in the genome.

The paper confesses, "All gene expression data are derived from different individuals than the ones that participated in the iEEG study."  This means the paper is an absurdity.  It is looking for correlations between one set of gene expression data measured in one set of individuals and another set of brain wave data measured in an entirely different set of individuals at a different time. That makes no more sense than trying to look for a correlation between some meal consumption in a 2016 woman's softball team and tooth decay rates in a 2017 male football team.

Most brain scanning studies consist of only one scanning session per individual. A much more reliable approach is to brain scan such individuals on multiple days. In the post here I discuss a case in which 45 subjects had their brain scanned on two different days, in an attempt to find evidence of greater brain activation during two different thinking tasks.  For both of these tasks, no evidence was found that reached a correlation level of "excellent," "good" or "fair."
at July 11, 2018