Scientists were once very convinced that they had figured out how burning works.  They were convinced that things burn because inside them is a combustible element or material called phlogiston, and that during burning this combustible element is released. We now know that this once-cherished theory is entirely wrong.  Like the earlier scientists believing in an incorrect theory of phlogiston, many a neuroscientist believes in the dubious idea that there are engram cells that store memories.  There is no robust evidence for any such thing.  In the post here I discuss some of the very many reasons for rejecting such a theory of neural memory storage. In the post here I discuss some of the flaws in studies that claim to provide evidence for engrams.

A recent MIT press release claims to have some new evidence for engrams, giving us the not-actually-correct headline "Neuroscientists discover a molecular mechanism that allows memories to form."  You might be impressed by hearing such an announcement from MIT, if you had not read my previous post entitled "Memory Experimenters Have Giant Claims but Low Statistical Power." In that post I examined many cases in which MIT had made impressive-sounding claims about memory research, which were based on studies that tended to be unconvincing because of their too-small study group sizes and low statistical power. It's the same old story in the latest study MIT is touting.

Here are some phrases I quote from the paper, phrases indicating study group sizes or the number of animals showing some claimed effect:

Alas, we once again have from MIT a memory study that has failed to provide robust evidence. A general rule of thumb is that to get modestly persuasive results, you need to use at least 15 animals per study group.  In the latest MIT study, apparently either much smaller sizes were used for some study groups, or the claimed effects occurred in only a small fraction of the animals, such as 4 out of 15 or 4 out of 30.  In either case, the results are not compelling. My criticisms of such papers for using too-small study group sizes is partially based on the guideline in the paper "Effect size and statistical power in the rodent fear conditioning literature – A systematic review," which mentions an "estimated sample size to achieve 80% power considering typical effect sizes and variances (15 animals per group)," and says that only 12% of neuroscience experiments involving rodents and fear met such a standard. 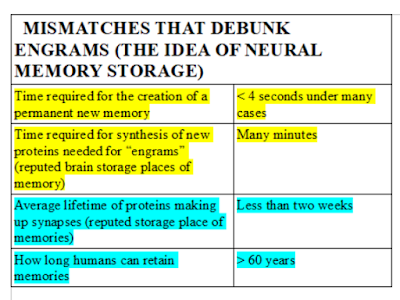 The 2018 paper here gives us a reason for rejecting all claims that memories are stored in brains. The paper finds that proteins in the human brain are replaced at a rate of about 3% to 4% per day. Unlike very many neuroscientists, who seem very skilled at ignoring the implications of their own findings, the authors actually seem to have a clue about the implications of their research. We read the following:
"Here we show that brain tissue turns over much faster at a rate of 3–4% per day. This would imply complete renewal of brain tissue proteins well within 4–5 weeks. From a physiological viewpoint this is astounding, as it provides us with a much greater framework for the capacity of brain tissue to recondition. Moreover, from a philosophical perspective these observations are even more surprising. If rapid protein turnover of brain tissue implies that all organic material is renewed, then all data internalized in that tissue are also prone to renewal. These findings spark (even) more debate on the interpretation and (long-term) storage of data in neural matter, the capacity of humans to consciously or unconsciously process data, and the (organic) basis of our own personality and ego."
The authors rightly seem to be hesitating about whether there actually is an organic basis for our personality and ego.  Given a protein replacement rate of 3% per day in the brain, we would not be able to remember things for more than about 35 days if our memories were created as brain engrams.
Postscript: This month the Science Daily site (which so often has hyped headlines not matching any robust research) has been showing a headline of "New Player in Long Term Memory."  The article is about a paper that suffers from the same problems as the paper discussed above.  The paper provides no real evidence for any physical effect in the brain causing memory consolidation.  Examining the paper, I find the same old problems that are found again and again and again in papers of this type, such as the following:
(1) Too-small study group sizes, with several being less than 8 animals per study group (15 is the minimum for a moderately reliable result).
(2) A study involving only mice, not humans.
(3) A use of an unreliable method for judging fear in animals (trying to measure the amount of time a mouse is "frozen" in fear), rather than use of a reliable fear-detection method such as measuring heart rate spikes.
(4) Citations to other papers that suffered from the same type of problems.
Looking further at the Marco paper (which is behind a paywall, but kindly provided to me by a scientist), I see other methodological problems with it. For one thing, mouse brains were studied hours  after some foot-shocking of mice,  which means there wasn't any real-time matching between a memory creation event and something happening in a brain.  The paper also informs us that "blinding was not applied in the behavioral studies (CFC) and imaging acquisition because animals and samples need to be controlled by treatment or conditions."  Blinding is a very important procedural precaution to prevent biased data acquisition and biased analysis, and we should be suspicious of experimental studies that fail to thoroughly implement blinding protocols.  The paper also makes no claim to be a pre-registered study. When a study does not pre-register a hypothesis to be tested, the scientists running the study are free to go on a "fishing expedition" looking in countless places for some type of association or correlation; and in such cases there is a large chance of false alarms occurring.
at October 07, 2020