The Rare "Total Recall" Effect That Conflicts with Brain Dogmas

In the Guardian this year, there was a long and very fascinating article entitled “Total Recall: The People Who Never Forget.” The article discusses very rare cases of people with what what is called hyperthymesia or Highly Superior Autobiographical Memory, a topic that the 60 Minutes TV program had covered in 2010.

Fewer than 100 such people have been identified. They have the uncanny ability to remember in great detail every single day of past years of their lives, sometimes stretching back for decades.

The article discusses Jill Price, and says this about her:

Price was the first person ever to be diagnosed with what is now known as highly superior autobiographical memory, or HSAM, a condition she shares with around 60 other known people. She can remember most of the days of her life as clearly as the rest of us remember the recent past, with a mixture of broad strokes and sharp detail. Now 51, Price remembers the day of the week for every date since 1980; she remembers what she was doing, who she was with, where she was on each of these days. She can actively recall a memory of 20 years ago as easily as a memory of two days ago, but her memories are also triggered involuntarily.

A memory researcher named James McGaugh has verified the accuracy of Price's recollections. One way to do this is simply to ask her questions about what happened on a particular day that something notable happened. For example, if asked on what day Rodney King was beaten, or what day Bing Crosby died, she can quickly recall the exact date. Of if asked the significance of some particular date, she can tell you some famous person died on that day. McGaugh also verified the accuracy of Price's recollections by checking her diary. He and his colleagues wrote up the case in a scientific paper. 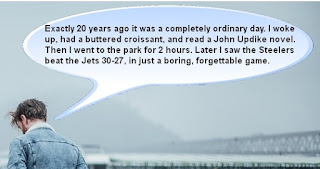 Another scientific paper (which can be read in full here) describes the case of HK, which the 2012 paper describes as a 20-year old person with “near-perfect” autobiographic memory. HK is described as blind and having been born at 27 weeks, 13 weeks early. The paper states:

As can be seen in Figure 1,for dates between this first memory until his 10th year of life, HK shows a relatively steady increase in accuracy for autobiographical events. Accuracy takes a noticeable jump to near 90% in 2001 at age 11. From that point forward, HK’s recollection of autobiographical events is near perfect.

The paper also gives us insight as to what it is like to have such a memory:

He reports that he is able to relive memories in his mind as if they just happened. HK stated that everything about his memory, including sounds, smells, and emotions, are vividly re-experienced when he remembers a particular event in time...,He stated that there is no difference in the vividness of his recollection between events that occurred when he was five and events that he experienced within the past month.

The scientists did an MRI scan of the brain of this person with this near-flawless autobiographic memory. Did it show something like an abnormally big brain? No, something like the opposite was found. For the paper tells us that the volumetric analysis “reveals significantly reduced total tissue volume in HK” and that “a volumetric analysis of subcortical structures shows general reduction in subcortical volumes in HK (1019 mL) relative to controls (1249 ± 29 mL).” So the person with this miracle memory had a brain about 20% smaller. The only part of his brain that was larger was his amygdala, an almond-shaped part of the brain. HK's was 20% bigger, but that's only a flea-sized difference.

Cases such as Price and HK apparently date back to the nineteenth century, for an 1871 article describes a man named Daniel McCartney who, according to the Guardian article, “could remember the day of the week, the weather, what he was doing, and where he was for any date back to 1 January 1827, when he was nine years and four months old.”

Something different from these cases of Highly Superior Autobiographic Memory or hyperthymesia are the cases of extraordinary memory in savants. Savants are individuals who have some mental disability but also have some extraordinary mental talents. An example of a savant is the late Kim Peek, who could accurately recall the details of 12,000 books he had read, despite having an IQ of only 87. Other examples are Tony DeBlois, who can play 8000 songs from memory, and Derek Paravicini who can play a piece after hearing it only once, despite having a severe learning disability.

So far researchers have failed to draw any noteworthy conclusions from these cases of extraordinary memory. But such cases may suggest that standard ideas about memory are wrong. The standard story is that memories are all stored in your brain. There are several reasons for rejecting this idea, such as the seeming impossibility of explaining how instantaneous recall of distant memories could occur (discussed here), and the reason (discussed here) that there is no workable theory of how brains could be storing memories for 50 years. The most popular theory is that memories are stored in synapses. But synapses are subject to a high rate of protein turnover and structural turnover which should make it impossible for synapses to be storing memories for longer than a year or two. The proteins in synapses are replaced within a few weeks. A recent scientific paper mentions an estimate that the rate of protein turnover in synapses is about 0.7% per hour, which is a rate of about 16% per day.

Under the assumption that memories are stored in brains, we would not by any means expect some people to remember their past experiences 800% better than an ordinary person can. Such a thing would seem to require a brain 800% bigger than the biggest brain that can fit into a human skull. And also under the assumption that memories are all stored in brains, we should not expect people with smaller brains or damaged brains (such as patient HK and Kim Peek) to have dramatically better memories.

But let's imagine a different scenario. Imagine if people's memories are not stored in brains, but are stored in some psychic or spiritual reality associated with a person. Your memories may be stored in something like your soul, not your brain. Under such a scenario, you might have complete memories for everything that happened to you. But your brain might act as a kind of valve, limiting your access to these memories. For some rare people, this normal blockage or limitation of access to biographical memory may not be occurring. Such people may have Highly Superior Autobiographic Memory.

Cases of Highly Superior Autobiographic Memory are easy to reconcile with such a theory. We simply imagine that in such people the brain's function as a kind of “blockage valve” for our memories is not working normally, so the blockage does not occur as it normally does. But cases of Highly Superior Autobiographic Memory are hard to reconcile with standard claims that the brain is where all your memories are stored. Under such claims, it is unthinkable that anyone should have memories such as Jill Price's, which would seem to require a brain the size of an elephant's.

Another interesting mind anomaly is the rare anomaly of acquired savants. A person may acquire extraordinary mental abilities after some accident. One such case is Orlando Serrell, who acquired extraordinary calculation and memory skills after being hit by a baseball when he was 10, in 1979. According to his web site, "He can recall the weather, where he was, and what he was doing for every day since the accident." Again, we have something that does not fit in with conventional dogmas about the brain, but which is compatible with very different ideas about memory. If your brain acts as a kind of faucet or valve for your memories, rather than a storehouse of such memories, it might be that a head injury might reset that valve so that memory is dramatically enhanced.

Similar cases that conflict with existing dogmas about memory are cases such as that of a man who memorized a shuffled deck of cards in only 18 seconds (reported here),  and the case of Solomon Shereshevsky, who could do things like listening to someone read at length from a newspaper, and then recite every word the person had read.

Stephen Wiltshire is a person who has the astonishing ability to accurately draw landscape scenes that he has only seen once. He has drawn incredibly detailed and accurate murals depicting cities such as Rome and London, after taking a single helicopter ride over the city.  One site describes how Wiltshire spent less than an hour viewing the cities of Barcelona, Palma de Mallorca and Marseille from a cruise ship, and then a month later he drew "highly accurate depictions" of them with "impressive detail."  Wiltshire has sometimes drawn these murals before spectators, which excludes the possibility of fraud.

We have in such cases examples of memories being produced with a very-high bandwidth, with tons of details being remembered after a single sensory experience. Such cases debunk prevailing theories of the brain storage of memory, which maintain that a stable new memory does not form until new proteins are synthesized to make synapses stronger. We know that protein synthesis requires minutes. If protein synthesis were required for memories to form, we would form new memories way too slowly.  If protein synthesis were required for memories to form, not only would an ordinary person's rate of memory acquisition be impossible, but the formation of new memories would occur at a rate a hundred times too slow to explain cases of Highly Superior Autobiographical Memory (hyperthymesia), or cases such as the case of Stephen Wiltshire or Solomon Shershevsky.

The preprint paper here discusses both cases of Highly Superior Autobiographical Memory and a rare opposite syndrome it calls Severely Deficient Autobiographical Memory (SDAM).  Speadking of SDAM cases, the paper says, "These are individuals who are unable to vividly recollect autobiographical experiences from their past, in the absence of detectable neural pathology or deficits in functional living."  If our memories are stored in our brains, why would some people have such a problem "in the absence of detectable neural pathology"?
at April 03, 2018

Email ThisBlogThis!Share to TwitterShare to FacebookShare to Pinterest
Labels: hyperthymesia