When Animals Cast Doubt on Dogmas About Brains

These days our science news sources typically try to get us all excited about many a science study that is not worthy of our attention.  But when a study appears that tells us something important, such a study will receive almost no attention if the study reports something that conflicts with prevailing dogmas about reality.  So some recent not-much-there study involving zapping dead brain tissue got lots of attention in the press, but a far more important neuroscience study received almost no attention.  The more important study was one that showed a rat with almost no brain had normal cognitive and memory capabilities.

The study was reported in the Scientific Reports sub-journal of the very prestigious journal Nature, and had the title "Life without a brain: Neuroradiological and behavioral evidence of neuroplasticity necessary to sustain brain function in the face of severe hydrocephalus."  The study examined a rat named R222 that had lost almost all of its brain because of a disease caused hydrocephalus, which replaces brain tissue with a watery fluid. The study found that despite the rat having lost almost all of its brain, "Indices of spatial memory and learning across the reported Barnes maze parameters (A) show that R222 (as indicated by the red arrow in the figures) was within the normal range of behavior, compared to the age matched cohort."   In other words, the rat with almost no brain seemed to learn and remember as well as a rat with a full brain.

This result should not come as any surprise to anyone familiar with the research of the physician John Lorber. Lorber studied many human patients with hydrocephalus, in which healthy brain tissue is gradually replaced by a watery fluid. Lorber's research is described in this interesting scientific paper. A mathematics student with an IQ of 130 and a verbal IQ of 140 was found to have “virtually no brain.” His vision was apparently perfect except for a refraction error, even though he had no visual cortex (the part of the brain involved in sight perception).

In the paper we are told that of about 16 patients Lorber classified as having extreme hydrocephalus (with 90% of the area inside the cranium replaced with spinal fluid), half of them had an IQ of 100 or more. The article mentions 16 patients, but the number with extreme hydrocephalus was actually 60, as this article states, using information from this original source that mentions about 10 percent of a group of 600. So the actual number of these people with tiny brains and above-average intelligence was about 30. The paper states:

Sadly, the authors of the "Life without a brain" paper seemed to have learned too little from the important observational facts they recorded. Referring to part of the brain, they claim that "the hippocampus is needed for memory," even though their rat R222 had no hippocampus that could be detected in a brain scan. They stated, "It was not possible from these images of R222 to identify the caudate/putamen, amygdala, or hippocampus."  Not very convincingly, the authors claimed that rat R222 had a kind of flattened hippocampus, based on some chemical signs (which is rather like guessing that some flattened roadkill was a particular type of animal).

But how could this rat with almost no brain have performed normally on the memory and cognitive tests?  The authors appeal to a miracle, saying, "This rare case can be viewed as one of nature’s miracles." If you believe that brains are what store memories and cause thinking, you must regard cases such as this (and Lorber's cases) as "miracles," but when a scientist needs to appeal to such a thing, it is a gigantic red flag. Much better if we have a theory of the mind under which such results are what we would expect rather than a miracle.  To get such a theory, we must abandon the unproven and very discredited idea that brains store memories and that brains create minds.

The Neuroskeptic blogger at Discovery magazine's online site mentions this rat R222, and the case of humans who performed well despite having the vast majority of their brain lost due to disease.  Let's give him credit for mentioning the latter. But we shouldn't applaud his use of a  trick that skeptics constantly employ: always ask for something you think you don't have.

The Neuroskeptic uses such a technique when he writes the following:

"In the case of the famous human cases of hydrocephalus, the only evidence we have are the brain scans showing massively abnormal brain anatomy. There has never, to my knowledge, been a detailed post-mortem study of a human case."

If there were such an alleged "shortfall," it would be irrelevant, because we can tell perfectly well from a brain scan the degree of brain tissue loss when someone has lost most of their brain, as happened in the case of Lorber's patients and other hydrocephalus patients.  Complaining about the lack of an autopsy study in such patients is like saying that you don't know that your wife lacks a penis, because no one did an autopsy study on her.  Neuroskeptic's claim of no autopsy studies on hydocephalus patients is incorrect. When I do a Google search for "autopsy of hydrocephalus patient," I quickly find several studies which did such a thing, such as this one which reports that one of 10 patients with massive brain loss due to hydrocephalus was "cognitively unimpaired."  Why did our Neuroskeptic blogger insinuate that such autopsy studies do not exist, when discovering their existence is as easy as checking the weather?

There are many animal studies (such as those of Karl Lashley) that conflict with prevailing dogmas about the brain. One such dogma is that the cerebral cortex is necessary for mental function.  But some scientists once tried removing the cerebral cortex of newly born cats. The abstract of their paper reports no harmful results:

"The cats ate, drank and groomed themselves adequately. Adequate maternal and female sexual behaviour was observed. They utilized the visual and haptic senses with respect to external space. Two cats were trained to perform visual discrimination in a T-maze. The adequacy of the behaviour of these cats is compared to that of animals with similar lesions made at maturity."

Figure 4 of the full paper clearly shows that one of the cats without a cerebral cortex learned well in the T-maze test, improving from a score of 50 to almost 100. Karl Lashley did innumerable experiments after removing parts of animal's brains. He found that you could typically remove very large parts of an animal's brain without affecting the animal's performance on tests of learning and memory.

Ignoring such observational realities, our neuroscientists cling to their dogmas, such as the dogma that memories are stored in brains,  and that the brain is the source of human thinking.  Another example of a dubious neuroscience dogma is the claim that the brain uses coding for communication.   A scientific paper discusses how common this claim is:

"A pervasive paradigm in neuroscience is the concept of neural coding (deCharms and Zador 2000): the query 'neural coding' on Google Scholar retrieved about 15,000 papers in the last 10 years. Neural coding is a communication metaphor. An example is the Morse code (Fig. 1A), which was used to transmit texts over telegraph lines: each letter is mapped to a binary sequence (dots and dashes)."

But the idea that the brain uses something like a Morse code to communicate has no real basis in fact.  The paper quoted above almost confesses this by stating the following:

"Technically, it is found that the activity of many neurons varies with stimulus parameter, but also with sensory, behavioral, and cognitive context; neurons are also active in the absence of any particular stimulus. A tight correspondence between stimulus property and neural activity only exists within a highly constrained experimental situation. Thus, neural codes have much less representational power than generally claimed or implied."

That's moving in the right direction, but it would be more forthright and accurate to say that there is zero real evidence that neurons are using any type of code to represent human learned information, and that the whole idea of "neural coding" is just a big piece of wishful thinking where scientists are seeing what they hope to see, like someone looking at a cloud and saying, "That looks like my mother." 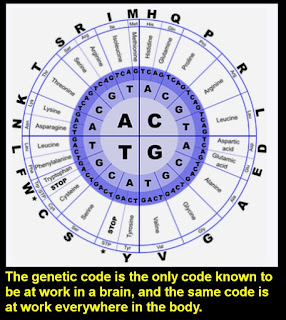