One of the main localization claims that has long been made by neuroscientists is a claim that thought or decision making come from the front top part of the brain, the prefrontal cortex. In my post here I cite many neuroscience papers giving evidence that conflicts with such a claim.  For example, the scientific paper here tells us that patients with prefrontal damage "often have a remarkable absence of intellectual impairment, as measured by conventional IQ tests." The paper here tested IQ for 156 Vietnam veterans who had undergone frontal lobe brain injury during combat. If you do the math using Figure 5 in this paper, you get an average IQ of 98, only two points lower than average. You could plausibly explain that 2 point difference purely by assuming that those who got injured had a very slightly lower average intelligence (a plausible assumption given that smarter people would be more likely to have smart behavior reducing their chance of injury). Similarly, this study checked the IQ of 7 patients with prefrontal cortex damage, and found that they had an average IQ of 101.

"Some of the most perspicacious animals are the corvids – crows, ravens, and rooks – which have brains less than 1 per cent the size of a human brain, but still perform feats of cognition comparable to chimpanzees and gorillas. Behavioural studies have shown that these birds can make and use tools, and recognise people on the street, feats that even many primates are not known to achieve." 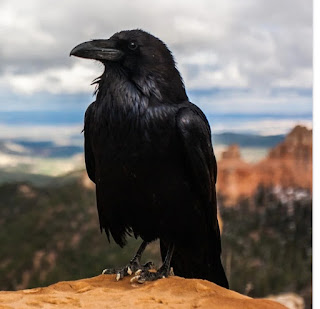 An article on the Science Daily site states the following:
"Some birds are capable of astonishing cognitive performances to rival those of higher developed mammals such as primates. For example, ravens recognise themselves in the mirror and plan for the future. They are also able to put themselves in the position of others, recognise causalities and draw conclusions. Pigeons can learn English spelling up to the level of six-year-old children."
There are two separate reasons why the cognitive abilities of ravens, crows and rooks argue against prevailing brain dogmas:
(1) According to prevailing brain dogmas, animals such as ravens with so tiny a brain should not be anywhere near as smart as they are.
(2) According to prevailing brain dogmas, animals such as ravens with no brain cortex should not be anywhere near as smart as they are.
In a recent "perspective" article in the journal Science,  a scientist makes a very strange attempt to get us to believe that crows have a cortex. The opinion piece is entitled, "Birds do have a brain cortex -- and think."  The author states that "birds, and particularly corvids (such as ravens), are as cognitively capable as monkeys and even great apes."  Using a tricky choice of words that might fool the average reader into thinking that some birds have more neurons than creatures such as humans, the author states, "Because their neurons are smaller, the pallium of songbirds and parrots actually comprises many more information-processing neuronal units than the equivalent-sized mammalian cortices."  Do not be fooled by this language.  The wikipedia.org page here lists the number of neurons in rooks, ravens and parrots as about  1 or 2 billion, and the number of neurons in a human as 86 billion. So humans have more than forty times more neurons than animals such as ravens and parrots.
The author's attempt to argue that birds have a cortex is not persuasive.  Referrring to a part of the bird brain called the pallium, she states, "Birds do have a cerebral cortex, in the sense that both their pallium and the mammalian counterpart are enormous neuronal populations derived from the same dorsal half of the second neuromere in neural tube development."  But that's rather like saying that your ten-year-old owns an automobile, in the sense that a bicycle is a wheeled transportation vehicle capable of moving fast like an automobile.  The cortex is defined as a distinctive layer of cells on the outside edge of a brain.  Birds do not have such a distinctive layer of cells on the outside edge of their brains. So the very many scientists who have stated that birds do not have a cerebral cortex have spoken correctly.
The author attempts to persuade us that the pallium of a bird's brain is kind of like a cortex, by making this dubious claim: "Nieder et al. show that the bird pallium has neurons that represent what it perceives—a hallmark of consciousness."  While we have good reason to think that the smarter birds such as ravens are conscious, there is no good evidence that any neurons of any organism represent something that the organism perceived.  When we look at the reference to the paper by Nieder and his colleagues, we find that it tested only two animals. 15 animals per study group is the minimum for a moderately reliable neuroscience experimental research paper.
Another article in the journal Science is just as silly as the one I just discussed.  The article is entitled "Newfound brain structure explains why some birds are so smart—and maybe even self-aware." The article contradicts the other Science article by referring to a lack of a neocortex in birds.  The article refers to a paper by Onur Güntürkün and others that obscurely refers to "hitherto unknown neuroarchitecture of the avian sensory forebrain that is composed of iteratively organized canonical circuits within tangentially organized lamina-like and orthogonally positioned column-like entities."
Another article quotes this Onur Güntürkün speaking rather more clearly:
" 'Here, too, the structure was shown to consist of columns, in which signals are transmitted from top to bottom and vice versa, and long horizontal fibres,'  explains Onur Güntürkün. However, this structure is only found in the sensory areas of the avian brain. Other areas, such as associative areas, are organised in a different way."
Of course, the mere existence of such column-like structures does nothing at all to explain the smarts of birds like ravens, particularly since such structures are found only in sensory areas.  There is no possible physical arrangement of neurons that would do anything at all to explain anything like intelligence in any organism. So the  Science article headline claiming that  "newfound brain structure explains why some birds are so smart" is baloney.
Postscript: A new scientific paper states that despite having tiny brains, mouse lemurs perform pretty much as well as primates with brains hundreds of times larger:
"Using a comprehensive standardized test series of cognitive experiments, the so-called 'Primate Cognition Test Battery' (PCTB), small children, great apes as well as baboons and macaques have already been tested for their cognitive abilities in the physical and social domain...For the first time, researchers of the 'Behavioral Ecology and Sociobiology Unit' of the DPZ have now tested three lemur species with the PCTB...The results of the new study show that despite their smaller brains lemurs' average cognitive performance in the tests of the PCTB was not fundamentally different from the performances of the other primate species. This is even true for mouse lemurs, which have brains about 200 times smaller than those of chimpanzees and orangutans. Only in tests examining spatial reasoning primate species with larger brains performed better. However, no systematic differences in species performances were ...found for the understanding of causal and numerical relationships nor in tests of the social domain."
Another study finds that even when ravens are only four months old, they have cognitive skills that rival those of great apes.
at September 28, 2020

Email ThisBlogThis!Share to TwitterShare to FacebookShare to Pinterest
Labels: intelligence of animals with small brains