Let us look at yet another argument for why brains cannot be storing the long-term memories of humans. This argument I will call the insertable sequential memories argument. I can concisely state the argument as follows: humans have the ability to store memories involving very long sequences, with an easy ability for insertion; but the human brain has no structural capability that can support any such ability, so some of our memories or ideas are probably stored or created in some mental reality that transcends the human brain.

First, let us consider the human ability to remember memories involving long sequences. An average person shows this ability by being able to remember the words and notes of many different songs. Each song is a particular sequence that must be remembered. You might think to yourself, “I don't know the words of many songs,” but if I were to have you browse though a list of the 500 most famous songs in history, you would find that you remembered the words and notes of lots of them. Of course, on the stage you might see something like a concert in which a singer sings from memory for 80 minutes. There are opera singers who have memorized various different roles in the operatic repertory, which may add up to many hours of words and notes they have memorized. In his prime years as an opera singer, Placido Domingo had at least 20 hours of opera roles he could sing upon demand (and would sometimes fill in for a sick singer, singing one of the many roles he knew by heart). Similarly, there are a number of Muslims who have memorized the entire Quran, a book of some 114 chapters or surahs.

We take this kind of sequential recall for granted, because this is the way we have always experienced memory working. Similarly, if we were able to exactly remember every word in each book we had read, we would take that for granted, and think it nothing special. But we must ask: does the brain have any type of structure that might allow such sequential recall to occur, if memories were all stored in the brain?

There is no such thing in the brain. The brain consists of billions of neurons, which are connected together. But there is a reason why the brain does not seem to have the right type of arrangement to allow for sequential recall of long sequences of information. The brain consists of neurons, and each neuron is connected to many other neurons. There is no “next” for a particular neuron. Neurons are not arranged in any type of chain-like structure that might support a recall of sequential memories.

Consider the physical way in which a book allows for a sequencing of information. Words are arranged in a linear order on a particular page. Also, the page order and binding of a book imposes a sequence on its contents, a sequential ordering we would not see if the pages were in a jumbled heap.

But consider the human brain. There seem to be no physical characteristics that might allow for sequential storage of information. It seems that if you try to store information in the brain, it should be like tossing a set of alphabet blocks onto a giant heap in a junkyard. 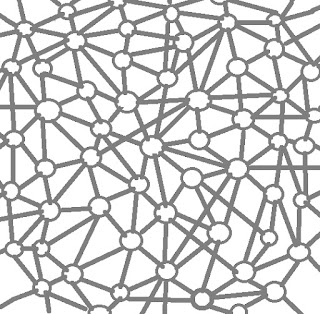 Consider the recall of sequential information. Imagine you are trying to recall a series of words. We might imagine that individual parts of the sequence are stored in individual neurons – perhaps something a little like the schematic visual below. But how could you recall the sequence in its correct order? Nerve cells are scattered throughout three dimensional space, with each neuron having many connections to other neurons. If information is stored in nerve cells, there would seem to be no way for a sequence to be stored in a way that would allow a sequential recall involving a long series, such as happens when an actor playing Hamlet recalls all of his many lines in the correct order. We can't imagine the brain simply going from one neuron to the “next” neuron to retrieve a sequence of information. This is because neurons don't exist in chains in which a particular neuron has a “next” neuron. Each neuron is connected to many other neurons.

Below we see a map of Dupont Circle in Washington D.C. 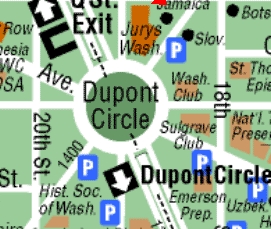 Once your car gets on Dupont Circle, there is no “next” place to go. You've reached an interchange in which there are 10 roads feeding out of the circular interchange. Similarly, in the photo below we see neurons. Each one of the parts coming out of the nerve cell is a path that can be traversed from this nerve cell. Such an arrangement should not offer any support for storing a sequence of information such as the lines in a play or the notes in a song. There's no “next” route leading from one neuron to the next neuron. Every neuron is like Dupont Circle, except that there are even more paths leading out of the neuron. 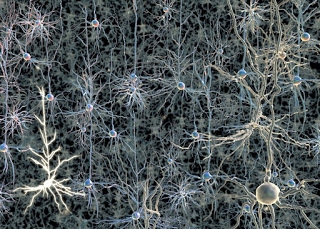 Now let's consider another aspect of human sequential memory: the fact that it is insertable. What this means is when we memorize a sequence, it is very easy to insert anywhere a new item in the sequence.


You can demonstrate this by trying a test such as this. Most Americans know the beginning of the song “America the Beautiful”

O beautiful, for spacious skies
For amber waves of grain

But what if we try to recall this sequential data with an insertion? Try memorizing the following variation, and see how long it takes to recall it while looking away from this page:

So evidently humans can remember sequences, and it is quite easy for us to make an insertion anywhere in the sequence. But from a neurological standpoint, such a thing should be impossible. For let us imagine that there is some sequence of neurons that stores a sequential memory, ignoring the difficulty that a neuron has no “next” and so neurons do not seem to be suitable for storing a sequence. Then let us imagine we are inserting an item somewhere in the middle of this sequence. This should be as physically difficult as inserting a new steel link in the middle of a steel chain (or in the middle of a chain link fence). We cannot imagine that a new neuron gets created (in the middle of the sequence) to store the new word or words that are being inserted, because new neurons are not created for each new item inserted into our memories.

There is still one other problem in postulating that sequential memory is stored in the brain. This is the “end of sequence” problem. Try recalling the song “America the beautiful.” Typically your recall will end nice and neatly with the line “From sea to shining sea.” When we remember a sequence of items such as the words in a song, we remember only up until the end point of the sequence. But how could we possibly do that, if memories are stored in neurons? Given the organization of neurons in the brain, storing a memory in neurons would seem to be like tossing a bucket of letter blocks on to a mountainous heap of blocks containing letters, words and image fragments – not at all an arrangement that allows you to tell where the end point of a particular sequential memory is to be found. Or if we imagine instead an analogy of writing on a few vines in a thick Amazon-type jungle of very densely packed vines, the “end of sequence” problem still is there.

The points discussed here constitute another argument for believing that our long-term memories are not actually stored in the brain, but are stored in some greater mental reality that is merely related to the brain.
at April 02, 2018