Long Article Tries to Show Neural Memory Storage, but Gives No Real Evidence for It

In Discover magazine, there was recently a long article entitled “What Happens in Your Brain When You Make Memories?” An article like this is an attempt to convince us that scientists have some good understanding of how a brain could store memories. But the article completely fails at such a task, and provides no substantial evidence for any such thing as neural memory storage.

We are told the following: “In the 1990s, scientists analyzed high-resolution brain scans and found that these fleeting memories depend on neurons firing in the prefrontal cortex, the front part of the brain responsible for higher-level thinking.” There is no actual evidence that the front part of the brain is responsible for high-level thinking. You can read here for evidence that specifically contradicts such a claim.

The quote above includes a link to a brain scanning scientific paper. That paper provides no evidence that memories depend on neurons firing anywhere. In any type of brain scanning study, the two main questions to ask are:  how many subjects were used, and what was the percent signal change detected during some supposed activation of some brain region? The paper does not tell us either of these things. It mentions some brain scanning study, but does not tell any details of how many subjects it used, or what percent signal change was detected. We can only assume that the study was one of those ridiculously common studies that either: (1) used too small a sample size to get a result of good statistical power, or (2) detected only meaningless signal changes such as less than 1%, the type of differences we would expect to get by chance, or (3) had both of these problems. When scientists use impressive sample sizes or when they get impressive brain scanning results regarding percent signal changes, they almost always tell us about such a thing. When there is a failure for a paper to mention either of these numbers, we should assume it is because the numbers were not impressive, and not good evidence.

In fact, there are reasons why it cannot be true that memories are formed by synapses being strengthened. The first is that synapses are too unstable to be a permanent storage place for memories. The proteins in synapses have an average lifetime of only a few weeks. But humans can accurately remember things for 60 years, which is 1000 times longer than 50 weeks. Synapses do not last for very long. The paper here says that half-life of synapses is "from days to months." The 2018 study here precisely measured the lifetimes of more than 3000 brain proteins from all over the brain, and found not a single one with a lifetime of more than 75 days (figure 2 shows the average protein lifetime was only 11 days).

The second reason is that humans are able to instantly form permanent new memories at a rapid clip. This was shown in an experiment in which humans were able to remember fairly well images they were only exposed to for a few seconds. The experiment is described in the scientific paper “Visual long-term memory has a massive storage capacity for object details.” The experimenters showed some subjects 2500 images over the course of five and a half hours, and the subjects viewed each image for only three seconds. Then the subjects were tested in the following way described by the paper:

"Afterward, they were shown pairs of images and indicated which of the two they had seen. The previously viewed item could be paired with either an object from a novel category, an object of the same basic-level category, or the same object in a different state or pose. Performance in each of these conditions was remarkably high  (92%, 88%, and 87%, respectively), suggesting that participants successfully maintained detailed representations of thousands of images."

Let us imagine that memories were being stored in the brain by a process of synapse strengthening. Each time a memory was stored, it would involve the synthesis of new proteins (requiring minutes), and also the additional time (presumably requiring additional minutes) for an encoding effect in which knowledge or experienced was translated into neural states. If the brain stored memories in such a way, it could not possibly keep up with remembering most of thousands of images that appeared for only three seconds each.

In the Discover magazine article, we have a clear description of the utterly fallacious experimental technique used by Tonegawa, a technique that has given him the wrong idea that he has found a memory in brains. Here is what the article says:

"In the paper, the research team describes how they pinpointed a particular group of neurons in the hippocampus, a part of the brain involved in the formation of long-term memories, that start firing under certain conditions. In this case, the researchers did so by having mice explore an unfamiliar cage. '[Then] you give [the mouse] mild electric shocks to their footpads,' says Tonegawa. 'And the mouse will immediately form a memory that this cage is a scary place.' The next day, says Tonegawa, when the mice were placed in the cage without being zapped, this conditioning led them to fear that environment. The researchers later injected the rodents with a protein that can trigger brain cells — specifically, the neurons in the hippocampus that the scientists were targeting — by flashing them with blue light. ''These proteins have a chemical property to activate cells when light of a particular wavelength is delivered,' adds Tonegawa. Then, when the scientists flashed the mice with pulses of light in an entirely different environment, the neurons in the hippocampus they had labeled with the protein sprung into action — and the mice froze in place. The researchers think the animals were mentally flashing back to the experience of being shocked. 'That’s the logic of the experiment,' says Tonegawa. 'You can tell that these neurons, which were labeled yesterday, now carry those memory engrams' ”

There are two reasons why this technique is fallacious and unreliable, and does not provide any evidence at all that memories are stored in the brains of these mice. The first is that when the brains of the mice are being flashed with pulses of light, this is a stimulation effect that itself may be causing a freezing effect causing a mice to “freeze in place,” even though no fearful memory is being recalled by the mice.  In fact, it is known that stimulating many different regions of a rodent brain will cause a mouse to “freeze in place.” A science paper says that it is possible to induce freezing in rodents by stimulating a wide variety of regions. It says, "It is possible to induce freezing by activating a variety of brain areas and projections, including the hippocampus (Liu et al., 2012), lateral, basal and central amygdala (Ciocchi et al., 2010); Johansen et al., 2010; Gore et al., 2015a), periaqueductal gray (Tovote et al., 2016), motor and primary sensory cortices (Kass et al., 2013), prefrontal projections (Rajasethupathy et al., 2015) and retrosplenial cortex (Cowansage et al., 2014).”  Therefore there is no reason at all to assume that the “freeze in place” is actually being caused by a recall of a memory. The “freeze in place” effect could be caused simply by the stimulation being delivered to the brains of the mice, without any recall occurring.

The second reason why such an experiment is no evidence at all for memory storage in a brain is that “freezing behavior” in mice is very hard to reliably measure. In a typical paper, judgments of how much a mouse froze will be based on arbitrary, error-prone human judgments. The reliable way to measure fear in mice is to measure their heart rate, which goes up very suddenly and rapidly when mice are afraid. But inexplicably, neuroscientists almost never use such a technique. Since scientists like Tonegawa do not use reliable techniques for determining whether rodents are afraid, and since the experiments depend on assumptions that the animals were afraid,  we should have no confidence in the results of experiments like those described above. 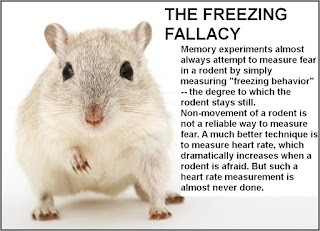 The Discover magazine article then proceeds to describe some work by neuroscientist Nanthia Suthana, in which epilepsy patients had their brains scanned when using video games.  We are told that some evidence was found that some kind of brain wave called theta oscillations was more common during memory recall. But we are not told how large an effect size was found, and have no way of knowing whether it was merely some borderline result unlikely to be replicated. We are not given a link for any paper that has been published,  and we are told that there are merely two papers "in peer review." We have no mention of how many subjects were used.   And memory retrieval is something quite different from memory storage.  These are all quite a few reasons why such an experiment is not anything like substantial evidence for any neural storage of memories.

The last gasp of the Discover article is to claim that "Sah and his colleagues used optogenetics in rats to identify the circuitry in the brain that controls the return of traumatic memories."  The "return of traumatic memories" refers to memory retrieval, which is an entirely different thing from memory storage.  We are given a link to some study behind a paywall, and the abstract mentions no actual numbers, meaning we have no basis for any confidence in it.  Given the rampant sample size problem in experimental neuroscience, in which too-small study groups are being used in most studies, we should have no confidence in any study if we merely can read an abstract that does not mention how large a study group was used.

Despite its long length, the Discover article fails to give us any solid piece of evidence suggesting that memories are stored in brains.  The Discover article is a kind of Exhibit A to back up my claim that scientists have no actual evidence basis for believing that memories are stored in brains.  Their "best evidence" for such claims are "house of cards" studies that do not meet the requirements of compelling experimental science.  We have no solid scientific basis for believing that memories are stored in brains, but we do have good scientific reasons for believing that memories cannot be stored in brains.  One such reason is that people do not suffer substantial losses of learned information when half of their brain is removed in hemispherectomy operations.  See the paper here for a discussion of 8 people who had "no observable mental changes" after removal of half of their brains. The paper specifically mentions "their memory was unimpared."  The second reason is that the proteins that make up the synapses of the brain have average lifetimes 1000 times shorter than the maximum length of time (60 years) that humans can retain memories.
at June 28, 2020