If it were true that memories were stored by a strengthening of synapses, this would be a slow process. The only way in which a synapse can be strengthened is if proteins are added to it. We know that the synthesis of new proteins is a rather slow effect, requiring minutes of time. In addition, there would have to be some very complicated encoding going on if a memory was to be stored in synapses. The reality of newly-learned knowledge and new experience would somehow have to be encoded or translated into some brain state that would store this information. When we add up the time needed for this protein synthesis and the time needed for this encoding, we find that the theory of memory storage in brain synapses predicts that the acquisition of new memories should be a very slow affair, which can occur at only a tiny bandwidth, a speed which is like a mere trickle. But experiments show that we can actually acquire new memories at a speed more than 1000 times greater than such a tiny trickle.

One such experiment is the experiment described in the scientific paper “Visual long-term memory has a massive storage capacity for object details.” The experimenters showed some subjects 2500 images over the course of five and a half hours, and the subjects viewed each image for only three seconds. Then the subjects were tested in the following way described by the paper:

Afterward, they were shown pairs of images and indicated which of the two they had seen. The previously viewed item could be paired with either an object from a novel category, an object of the same basic-level category, or the same object in a different state or pose. Performance in each of these conditions was remarkably high  (92%, 88%, and 87%, respectively), suggesting that participants successfully maintained detailed representations of thousands of images. 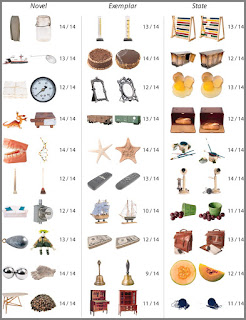 Although the authors probably did not intend for their experiment to be any such thing, their experiment is a great experiment to disprove the prevailing dogma about memory storage in the brain. Let us imagine that memories were being stored in the brain by a process of synapse strengthening. Each time a memory was stored, it would involve the synthesis of new proteins (requiring minutes), and also the additional time (presumably requiring additional minutes) for an encoding effect in which knowledge or experienced was translated into neural states. If the brain stored memories in such a way, it could not possibly keep up with remembering images that appeared for only three seconds each in a long series. It would be a state of affairs like that depicted in what many regard as the funniest scene that appeared in the “I Love Lucy” TV series, the scene in which Lucy and her friend Ethel were working on a confection assembly line. In that scene Lucy and Ethel were supposed to wrap chocolates that were moving along a conveyor belt. But while the chocolates moved slowly at first, the conveyor belt kept speeding up faster and faster, totally exceeding Lucy and Ethel's ability to wrap the chocolates (with ensuing hilarious results).

The experiment described above in effect creates a kind of fast moving conveyor belt in which images fly by at a speed so fast that it should totally defeat a person's ability to memorize accurately – if our memories were actually being created through the slow process imagined by scientists, in which each memory requires a protein synthesis requiring minutes, and an additional time (probably additional minutes) needed for encoding. But nonetheless the subjects did extraordinarily well in this test.

There is only one conclusion we can draw from such an experiment. It is that the bandwidth of human memory acquisition is vastly greatly than anything that can be accounted for by neural theories of memory storage. We do not remember at the speed of synapse strengthening, which is a snail's speed similar to the speed of arm muscle strengthening. We instead are able to form new memories in a manner that is basically instantaneous. The authors of the scientific paper state that their results “pose a challenge to neural models of memory storage and retrieval.” That is an understatement, for we could say that their results are shockingly inconsistent with prevailing dogmas about how memories are stored.

There are some people who are able to acquire new memories at an astonishing rate. The autistic savant Kim Peek was able to recall everything he had read in the more than 7000 books he had read. Here we had a case in which memorization occurred at the speed of reading. Stephen Wiltshire is an autistic savant who has produced incredibly detailed and accurate artistic works depicting cities that he has seen only from a brief helicopter ride or boat ride. Of Wiltshire, savant expert Darold Treffert says, "His extraordinary memory is illustrated in a documentary film clip, when, after a 12-minute helicopter ride over London, he completes, in 3 hours, an impeccably accurate sketch that encompasses 4 square miles, 12 major landmarks and 200 other buildings all drawn to scale and perspective." Again, we have a case in which memories seem to be formed at an incredibly fast rate. Savant Daniel Tammet (who one time publicly recited accurately the value of pi to 22,514 digits) was able to learn the Icelandic language in only 7 days. Derek Paravicini is a blind and brain-damaged autistic savant who has the incredible ability to replay any piece of music he has heard for the first time. In 2007 the Guardian reported the following:

Derek is 27, blind, has severe learning difficulties, cannot dress or feed himself - but play him a song once, and he will not only memorize it instantly, but be able to reproduce it exactly on the piano. One part of his brain is wrecked; another has a capacity most of us can only dream of.

Other savants such as Leslie Lemke and Ellen Boudreaux have the same extraordinary ability to replay perfectly a song heard for the first time.

Cases such as these are inconsistent with prevailing theories of memory. Are we to believe that such people (typically with substantial brain damage) can somehow synthesize proteins in their brains ten times or thirty times faster than the average human, so that their synapses can get bulked up ten times or thirty times faster? That's hardly credible. But if memories are not actually stored in brains, but stored in or added to a human psychic or spiritual facility, something like a soul, then there would be no reason why the brain-damaged might not have astonishing powers of memorization.

Some people can form memories 1000 times faster than should be possible under prevailing theories of brain memory storage, which involve postulating protein synthesis and encoding operations that should take minutes. This thousand-fold shortfall in only one of three thousand-fold shortfalls of the prevailing theory of brain memory storage. The two other shortfalls are: (1) humans can remember things for 50 years or more, which is 1000 times longer than the synaptic theory of memory storage can account for (synapses having average protein lifetimes of only a few weeks); (2) humans can recall things 1000 times faster than should be possible if you stored something in some exact location of the brain. If you stored a memory in your brain (an organ with no numbering system or coordinate system), it would be like throwing a needle onto a mountain-sized heap of needles, in the sense that finding that exact needle at some later point should take a very long time.

The imaginary conversation below illustrates some of the many ways in which prevailing dogma about brain memory storage fails. It's the kind of conversation that might occur if memories were formed according to the "brain storage of memory" dogmas that currently prevail among neuroscientists.

After five additional minutes like this, the conversation continues.

Costello: Okay, so it's been five minutes since I first told you what the capital city of Spain is. You should have had enough time to have formed your memory of this fact.
Abbott: I'm sure by now I have formed that memory, because there has been enough time for protein synthesis in my synapses.
Costello: So what is the capital city of Spain?
Abbott: I can't recall.
Costello: But you formed the memory by now. Why can't you recall it?
Abbott: The problem is that I don't know exactly where in my brain the memory was stored. So I can't just instantly recall the memory. The memory is like a tiny needle in a haystack. There's no way I can find that quickly.
Costello: Can't you just search through all the memories in your brain, looking for this one?
Abbott: I could try, but it would take hours or days to search through all those memories.
Costello: Sheesh, this is driving me crazy. How about this? I can teach you that Madrid is the capital city of Spain, and when you form the memory, you can tell me the exact tiny spot where your memory was formed. So maybe you'll tell me, “Okay I stored that memory at brain neuron number 273,835,235.” Then I'll just say to you something like, “Please look in your brain at neuron number 273,835,235, and retrieve the memory you stored of what is the capital city of Spain.”
Abbott: That's a brilliant idea!
Costello: Thanks.
Abbott: On second thought, it will never work.
Costello: Why not?
Abbott: Neurons aren't numbered, and the brain has no coordinate system. It's like some vast city in which none of the streets are named, and none of the houses have house numbers. So if I put a memory in one little “house” in the huge brain city, I'll never be able to tell you the exact address of that house.
Costello: So how the hell am I supposed to teach you anything?
Abbott: Beats me. And if I ever learn anything new, I'm sure I won't remember it for more than a few weeks. That's because there's a big problem with those proteins that I will synthesize to store those new memories. They have average lifetimes of only a few weeks.

As long as they cling to “brain storage of memory” dogmas, our neuroscientists will never be able to overcome difficulties such as those mentioned in this conversation.