Preservation of Mind and Memories After Removal of Half a Brain


Scientists have very often claimed that the human mind is produced by the brain, and that memories are stored in the brain. A very interesting question is: could you do a sink-or-swim experiment testing such hypotheses? The experiment has actually been done, not just once but many times. I will here use the term “experiment” for medical procedures that were usually done for medical reasons such as stopping very bad brain seizures in patients. Although the doctors who did such procedures may not have considered them experiments, we can consider them as experiments in the sense of testing a particular hypothesis about the brain.

The sink-or-swim experiment for the hypothesis that the brain makes the mind and the hypothesis that the brain stores memories is to surgically remove half of the brain, and see what the effect is on the mind and memory. Such an experiment has been done many times. Almost every time the result has been that there was no major effect on consciousness, no major effect or intelligence, and no major effect on memory. The memories of people who had half of their brains removed usually preserved the knowledge and life memories they had acquired.

This is a “sink” result for this sink-or-swim experiment. The results of such surgical operations decisively refute claims that the mind is the product of the brain and claims that the brain is the storage place of memories. But addicted to materialist dogma that the mind is merely the product of the brain and that memories are stored in brains, virtually no neuroscientists have paid attention to the results of these sink-or-swim experiments. In this regard, they are like fundamentalists who keep believing that the Earth is 6000 years old despite observational results indicating our planet is billions of years old.

I have in five previous posts (here, here, here, here and here) listed very much data relating to such experiments. In this post I will not restate that data showing that intelligence is well-preserved after removing half of the brain, but will mostly cite some data and cases I have not previously discussed.

I can start with the results reported in the American Journal of Psychology, Vol. 46, No. 3 (Jul., 1934), pages 500-503, regarding work of W. E. Dandy, in which he removed half of the brains of patients. You can read the results in the preview here (without doing any registration). We read the following (I have put a few of the sentences in boldface):

“Dandy has completely removed the right cerebral hemisphere from eight patients. He has performed total extirpations of one or more lobes much oftener... There are tabulated below certain generalizations on the effects of removing the right hemisphere.... The operation was the complete extirpation of the right frontal, temporal, parietal, and occipital lobes peripheral to the corpus striatum. The weight of the tissue re moved varies, with the pathological conditions involved, from 250 to 584 grm [grams].Coherent conversation began within twenty-four hours after operation, and in one case on the afternoon of the same day. Later examinations showed no observable mental changes. The patients were perfectly oriented in respect of time, place, and person; their memory was unimpaired for immediate and remote events; conversation was always coherent; ability to read, write, compute, and learn new material was unaltered. Current events were followed with normal interest. There were no personality changes apparent; the patients were emotionally stable, without fears, delusions, hallucinations, expansive ideas or obsessions, and with a good sense of humor; they joked frequently. They showed a natural interest in their condition and future. They cooperated intelligently at all times throughout post-operative care and subsequent testing of function.”

It would be rather hard to imagine a more decisive refutation of the claim that the human brain is the source of the human mind, and the claim that the human brain is the storage place of human memories. Here are eight people who had half of their brains removed. Yet the people showed “no observable mental changes,” and “their memory was unimpaired for immediate and remote events.” The people could read, write, compute and learn just as if nothing had happened, and “there were no personality changes.”

The same paper refers to previous results when removing half of a brain, and notes data suggesting that such an operation has little negative effect on intelligence. Referring to intelligence, we are told that McKissock reported “short term improvement in 13 of 17 cases,” that another researcher found “significant improvement in verbal intelligence scores in a variety of tests after operation in five of 35 cases, with temporary deterioration in two, the remainder unchanged.” We are also told that White “reports improvement in personality in 80% of 134 cases” in which half of the brain was removed.
The 2013 paper "Long-term functional outcomes and their predictors after hemispherectomy in 115 children" reports this: "In this cohort of 115 children, at a mean follow-up of 6.05 years after hemispherectomy, 83% patients walked independently, 73% had minimal or no behavioral problems, 69.5% had satisfactory spoken language skills, and 42% had good reading skills."  These results are for people with half-brains, and we should remember that a large fraction of people with full brains lack good reading skills.  Typically a hemispherectomy operation occurs as a last resort for a child who has been long-plagued by seizures.  Before the operation, such seizures may have long-disrupted normal learning.  So this 42% may not even reflect any major deterioration in reading skills after removal of half a brain.

In the scientific paper here, we have on page 248 and page 250 before and after test scores for various subjects who had of their brains removed in hemispherectomy operations.  The IQ score differences are slight. IQ tests don't involve learned information, but almost any IQ test would be largely a test of memory, as it would be a largely a test of ability to read test questions.

On the same pages we have before and after test scores for Peabody Picture Vocabulary Tests given to various subjects who had  half of their brains removed in hemispherectomy operations.   In these tests, someone is shown picture cards like the one below, and asked to name the words represented by the pictures.  These tests are tests of memory retention after removal of half of the brain.  On these memory tests there was no decline in the score of 21 subjects mentioned on page 248, and no decline in 7 subjects mentioned on page 250. 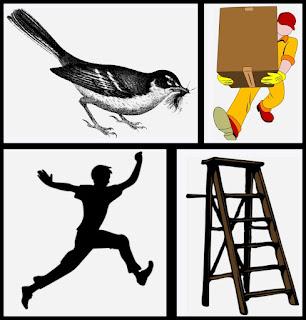 In an article in the New Yorker magazine, we are told of a Christina Santhouse who had half of her brain surgically removed: “When I met her, she had taken her S.A.T.s and just finished high school, coming in seventy-sixth in a class of two hundred and twenty-five.” If your brain makes your mind, how could you finish in the top 34% of your class with only half a brain? The same article tells us of someone who had half of the brain removed, but made the dean's list in college, a list of the top-performing students on campus.

An article in the LA Times tells us about memory preservation in a young girl who lost half her brain:

“How is it that 8-year-old Beth Usher of Storrs, Conn., can lose her left hemisphere, yet retain her large repertoire of knock-knock jokes? Beth’s memories survived not just the loss of brain tissue, but also the 32 days that she spent in a coma, the result of some brain stem swelling that occurred in response to the trauma of surgery. Shortly after Beth regained consciousness, her father began quizzing her about people and places from her past. Brian Usher didn’t get very far. 'Dad,' Beth interrupted, with a trace of impatience. 'I remember everything.' ”


On page 59 of the book The Biological Mind, the author states the following:

"A group of surgeons at Johns Hopkins Medical School performed fifty-eight hemispherectomy operations on children over a thirty-year period. 'We were awed,' they wrote later of their experiences, 'by the apparent retention of memory after removal of half of the brain, either half, and by the retention of the child's personality and sense of humor.' "

There is a reason why we can be confident that removal of half of a brain in hemispherectomy operations does not cause any major loss of learned memories.  If there was a case of any such thing happening, you can believe that it would be endlessly recited by those who wish for us to believe that memories are stored in brains.  But there is no such case, so we never hear materialists telling us about some person who suffered some dramatic loss of learned knowledge after having a hemispherectomy operation in which half of his brain was removed.

Our professors very often make biology claims that are contrary to the low-level facts of biology. The table below lists various cases in which the fantasy biology of academia dogma diverges from biology reality.


The image below reproduces the table above. 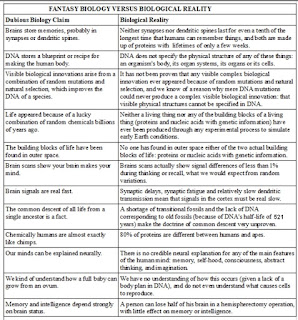