The Sociological Reasons Why Bad Explanations Persist in Academia

Such an argument will have little weight to the person who studies either of these things: the history of highly erroneous teachings made by esteemed authorities, and the sociology of groupthink and social conformity. Let's look at the first of these things. It is a fact that during the past 100 years there have been some important cases of expert opinion that was not only wrong, but wrong with disastrous consequences.

Here are a few examples:

From all of these examples we can make the general conclusion that expert opinion is very often wrong, and not just wrong in some small way, but wrong in a very big way.

Is there some general reason why experts often get things wrong? There seems to be such a reason. It is the fact that experts often are trained in ideological enclaves. An expert typically becomes an expert by volunteering for some particular graduate or specialized training program at a university or in the military. These graduate programs are often ideological enclaves, places where there predominates some particular ideology not embraced by most people. The ideology that predominates at neuroscience departments of universities is a materialist ideology based on dogmas such as the dogma that minds are made by brains.

The fact that the graduates of such programs are volunteers creates the opportunity for sociological selection effects. Let's imagine an extreme example. Let's imagine there arises some new discipline called tricostics. It might be the opinion of 90% of those who have read about tricostics that tricostics is pure nonsense. But tricostics might be “all the rage” at some Graduate Program in Tricostics Studies at a particular university, or some Pentagon training program specialized in tricostics. The people who sign up for such a program might almost all be from the tiny fraction of the population that believes in tricostics. At this particular program there might then be tremendous sociological pressure for students to embrace tricostics. So 90% of the graduates of this tricostics program might be believers in tricostics, even though a randomly selected jury from the general population would probably conclude tricostics is worthless nonsense. 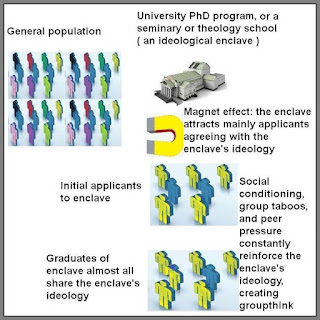 An expert existing in some ideological enclave may get be filled with dogmatic overconfidence about some opinion that is popular within his little ideological enclave. He may think something along the lines of: “No doubt it is true, because almost all my peers and teachers agree that it is true.” But the idea may seem senseless to someone who has not been conditioned inside this ideological enclave, this sheltered thought bubble.

A good rule is: decide based on the facts, and not merely because there is some consensus of experts.

Besides these sociological factors, it is easy to think of psychological and financial factors why experts may tend to come to wrong conclusions in matters of neuroscience and evolutionary biology.

Exercise 1: Imagine you have just spent five long hard years and $100,000 in cash to get a PhD in neuroscience. Now you can believe one of two things:

Which of these two opinions will you tend to favor after having spent five long years and $100,000 of your money to get a PhD in neuroscience? Of course, there are psychological reasons why you will tend to favor the second opinion, which bolsters your prestige and self-esteem. Similarly, a person who spends five years getting a PhD in evolutionary biology (spending $100,000 on graduate school) will have a very strong tendency to think that he has become a great knowledge master who can now explain how biological innovations arose and how species appeared, an opinion that bolsters his own self-esteem and prestige.

In both of these cases a person who has no vested interest may tend to come to a vastly different conclusion than the person who has a vested interest in the matter. When we also consider that the newly minted neuroscience PhD or evolutionary biologist PhD has a vast financial incentive to parrot the party line (which will make him more likely to get appointed as a tenured professor and more likely to get his papers published), it is rather easy to understand the persistence of unfounded but popular dogmas in these fields.

Below are some cases of social groups in which all members were conditioned to believe certain dogmas, with various forms of sanctions for any deviation from the group orthodoxy.


In each of these groups there is or was relentless peer pressure to conform to the doctrine in the second column.  A person outside the group may regard such a doctrine as absurd, but to the group member bound by the iron chains of social conformity, such a doctrine may have been deemed as unquestionable wisdom.

People will think and do things merely because it is customary to think and do such things. Consider male New York City office workers in the 1950's. Almost every one of them went to work wearing a tie. But wearing a tie is a silly custom. A man's neck will be more comfortable if he doesn't wear a tie. So why did office workers in the 1950's all wear ties? It was the power of social conformity effects. No one wanted to be the "oddball" who did not wear a tie in his office.  Belief customs and dress customs may persist for decades or centuries mainly because of the power of peer pressure and social conformity effects.  A conformist social group (whether it be a tribe of academics or a high school cafeteria table) compels us to dress or speak in some way, and we conform, wanting above all to fit in to whatever little social group we are part of.
at April 03, 2018

Email ThisBlogThis!Share to TwitterShare to FacebookShare to Pinterest
Labels: groupthink, sociology of science