No One Understands How a Brain Could Generate Ideas

The first and top-rated answer on this "expert answers" site is given by one Phil Macquire, an individual who has no listed scientific credentials, and who has primarily answered movie questions on this site. Phil gives an answer that shows some literary skill but provides no real insight at all as to how a brain could generate ideas. He says,  "How the subconscious mind performs this incredible feat is such a mystery."

The second answer by Tanush Jagdish begins by saying, “We don't know,” but then suggests “synaptogenesis,” the creation of new synapses. This is not a plausible idea. Some text such as “tall blue cold triangle” can instantly create an idea in your head that you have never had before, and you certainly did not have to wait for new synapses in your brain to form before you had such an idea.

The next answer by Jeff Nosanov is a circuitous answer that explains nothing, while claiming incorrectly that “ideas cannot be made to happen.” Nosanov ends by saying “that was not a physiological explanation.” Then the page has some answers by non-scientists which are not illuminating.

A similar page on the “Ask science” sub-reddit at www.reddit.com offers equally little illumination. A Google search for “how the brain generates ideas” will result in a vast wasteland of results failing to offer a single neuroscience study offering any real illumination on this topic. One of the items you will get is a Harvard news story with the title “How the brain builds new thoughts.” But the story is discussing some research that does nothing to explain such a thing – just another one of those oh-so-dubious brain scanning studies in which some scientists scan brains and find trivial differences in blood flow. Ditto for this Science News story entitled "How does our brain form creative and original ideas?" We merely are told of some brain scanning study, and told that some scientists hypothesized that the brain uses "a number of different networks" to generate ideas. That's basically telling us nothing.

An article here is entitled "A Neuroscientist and a Composer on How the Brain Generates New Ideas." The neuroscientist talks on and one, but we get no actual insight from the neuroscientist on how neurons could possibly generate an idea.  Try doing a Google search for "how the brain generates ideas." You will find no coherent answer discussing things on a neurological level.

In his book The Consciousness Instinct (which makes the absurd assertion that consciousness is an instinct), neuroscientist Michael Gazzaniga  makes a clumsy attempt to explain how a brain might generate an idea. He states this on page 8 (repeating the analogy on other pages of his book):


It is as if our mind is a bubbling pot of water. Which bubble will make it to the top at any given moment is hard to predict. The top bubble ultimately bursts into an idea, only to be replaced by more bubbles. The surface is forever energized with activity, endless activity, until the bubbles go to sleep.

As an attempt to explain the origin of ideas, this is a complete flop. A bubble is a physical thing, not a mental thing. When someone creates the abstract idea (such as the idea of a Trumper after viewing various zealous Trump supporters), such an abstraction (a mental act) bears no resemblance to a bubble floating up from hot water, a physical event which does not involve any observations.

Water being heat up in a pot and producing bubbles is in several respects a very poor analogy for the creation of an idea. A human being will come up with a new idea only very slowly, and a human will only have one thought in his head at any single time. But in a heating pot of water, we see dozens of bubbles very quickly rising at the same time. When water starts to boil, it is a frothy chaos that bears no resemblance to the orderly thinking of a person trying to produce a new idea.

One idea that neuroscientists have to try to explain a mind creating ideas is some idea of combination, kind of the idea that you create a complex idea by combining simpler ideas. This does not explain the miracle of abstract thought (and begs the question by failing to explain simpler ideas). Let us imagine a savage who experiences 100 cold days, and who then reaches the abstract concept of coldness. This idea is not reached from any type of combination – it is reached by abstraction. Similarly, a person who sees 100 other humans may reach the abstract idea of a human being. But that idea is not reached by combination.

Computers offer not the slightest clue as to how abstract thinking can occur, because no computer has ever had a concept, an idea, or an abstract thought, something that requires a conscious mind. Don't be fooled by the type of computer program called an idea generator. Such programs are typically just programs for combining words into novel combinations. Until a human reads the output of such a program, an idea is not actually created.

The neurosurgeon Wilder Penfield once noted that no type of electrical stimulation of the brain ever causes someone to produce ideas. Penfield said the following:

But none of the actions we attribute to the mind has been initiated by electrode stimulation or epileptic discharge. If there were a mechanism in the brain that could do what the mind does, one might expect that the mechanism would betray its presence in a convincing manner by some better evidence of epileptic or electrode activations.


It might be claimed that ideas are somehow derived from sensory experience. Someone might claim that you get the idea of an apple after you have seen lots of apples. But that does not work as a general explanation for ideas. For example, a human may have the idea of the number a quadrillion, but no human has ever observed a quadrillion things. A science fiction writer may have some weird such idea such as a time machine, unlike anything humans have ever observed. Humans have come up with the idea of an immaterial spirit with infinite power. But they have no sensory experience of immaterial spirits, and have never observed anything infinite. So how could such ideas ever have arisen from a brain? There is no neurological answer to this question. Any attempt to explain how neurons or synapses can produce novel ideas will very quickly start sounding absurd or implausible. 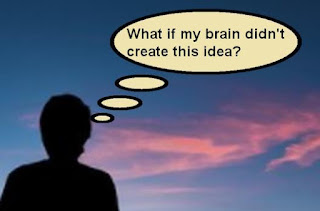