They're Desperately Seeking Non-noise From the Brain's Dominant Noise

Brains are extremely noisy. Many neurons fire at unpredictable intervals, just as maple leaves fall from a tree in autumn at unpredictable intervals. A scientific paper tells us, “Neuronal variability (both in and across trials) can exhibit statistical characteristics (such as the mean and variance) that match those of random processes.” Another scientific paper tells us that “Neural activity in the mammalian brain is notoriously variable/noisy over time.” Another paper tells us, "We have confirmed that synaptic transmission at excitatory synapses is generally quite unreliable, with failure rates usually in excess of 0.5 [50%]." A paper tells us that there are two problems in synaptic transmission: (1) the low likelihood of a signal transmitting across a synapse, and (2) a randomness in the strength of the signal that is transmitted if such a signal transmission occurs. As the paper puts it (using more technical language than I just used):

"The probability of vesicle release is known to be generally low (0.1 to 0.4) from in vitro studies in some vertebrate and invertebrate systems (Stevens, 1994). This unreliability is further compounded by the trial-to-trial variability in the amplitude of the post-synaptic response to a vesicular release."

Another paper concurs by also saying that there are two problems (unreliable synaptic transmission and a randomness in the signal strength when the transmission occurs):

"On average most synapses respond to only less than half of the presynaptic spikes, and if they respond, the amplitude of the postsynaptic current varies. This high degree of unreliability has been puzzling as it impairs information transmission."

All of these facts are extremely damaging to all claims that the brain is the storage place of human memories, and the source of human thought. We know that humans can recall large bodies of information with perfect reliability. This happens every time someone plays the role of Hamlet, and correctly speaks every word in the 1480 lines in this role. The same reliability occurs when numerous Muslim scholars correctly recall every word in their holy book, a book of more than 6000 verses. Akira Haraguchi was able to recite correctly from memory 100,000 digits of pi in 16 hours, in a filmed public exhibition. Besides such feats of perfectly reliable retrieval of very large bodies of information, there are also numerous math calculation savants who can perform very complex calculations with perfect accuracy.  No such feats should be possible if they are produced by brains dominated by noise, brains in which signals are transmitted so unreliably.

So what do you do if you are a scientist or philosopher handling the topic of brain noise, but mind-chained to the dogma that everything mental comes from the brain? You desperately seek to evade the clear message spoken by the brain's physical characteristics (the message that brains are physically unsuitable for massive accurate memory recall and accurate complex calculation),  and you  try to suggest that maybe there's non-noise in all of that tons and tons of brain noise.  A pair of recent essays have been examples of such a thing.

An article in Quanta magazine is entitled "Brain’s ‘Background Noise’ May Hold Clues to Persistent Mysteries."  We see two of the tricks often used when discussing quarter-baked ideas without any real observational basis. The first trick is to use some very vague and not-very-confident phrase such as "could hold clues" when discussing some unsubstantiated idea. The second trick is to use the vague claim that a "growing number" of scientists think something or suspect something, which doesn't really mean anything substantial, since the "growing number" might be something like "2 out of 20,000 increasing to 3 out of 20,000." Whenever people make a claim of a "growing number" of scientists believing something, they never give actual statistics backing up such a claim, and so we should suspect that there's no actual basis for such a claim of growing popularity.  The two tricks were used in this sentence: "Lendner is one of a growing number of neuroscientists energized by the idea that noise in the brain’s electrical activity could hold new clues to its inner workings."

What follows in the article seems to be just an example of why people say "torture the data sufficiently and it will confess to anything," although in this case we don't even have such a "confession." We have a discussion of some scientists trying mathematical transformations of brain noise, eagerly trying to extract something that can be called a meaningful signal. No evidence is provided that the brain noise being analyzed is anything other than noise.  We merely get the impression of scientists desperately seeking some signal where there is none.  A similar thing might happen if biologists were to mathematically analyze dog barks in a hundred different ways, eagerly looking for some evidence of a dog language in the barks.

We are given not one bit of indication that the so-called "aperiodic signals" derived from these mathematical fiddlings with brain noise readings actually are any such thing as a signal containing information, like a radio signal. Near the end of the article, these alleged "aperiodic signals" extracted from brain noise by mathematical fiddlings are compared to dark matter, a comparison that may cause a chuckle in anyone who has critically studied modern cosmology. Dark matter has never even been observed.

At the Salon web site, we have an article by philosopher Thomas Nail entitled "Most brain activity is 'background noise' — and that's upending our understanding of consciousness." From this title you might get the idea that Nail has drawn the correct conclusion he should have drawn from "most brain activity is background noise": that the brain cannot be the cause of perfect recollections of vast bodies of information, and cannot be the cause of human mathematical calculation that can occur so flawlessly in some gifted people.  But no, Nail has instead drawn the wrong conclusions.  He makes groundless and silly-sounding statements such as "Neurons amplify the noise and even use it to help generate novel solutions to complex problems."  No one has any understanding of how neurons could generate any ideas at all,  and if neurons were to do such a thing, signal noise would be something to be avoided, not amplified.

Nail makes this incorrect claim: "Several critical studies in this area have shown that cognitive flux, or 'spontaneous fluctuation,' is not secondary to but rather fundamental for consciousness, as neuroscientists Georg Northoff, Robin Carhart-Harris, and Stanislas Dehaene argue." He provides links to these authors, but none of the links provides any evidence we can freely read backing up any claim that any such thing has been shown.  Two of the links are to two old books unavailable for reading without purchase. Another link is to a paywalled paper with an abstract that confesses it is merely a hypothesis (one appealing rather suspiciously to psychedelic experiences as supporting evidence).

Nail provides no evidence for his groundless claim that "just as whirling patterns emerge from turbulent waters, our stream of conscious thoughts and feelings arise from the torrent of spontaneous brain fluctuations."  This is a very absurd analogy. Whirling patterns in water do not involve information retrieval, and are momentary things showing no great organization. But a college professor can expound for a solid hour of organized thought on some topic, showing a degree of organization a thousand times greater than anything in whirling patterns of turbulent waters, and with an abundance of information retrieval not found in whirling patterns of turbulent waters.  The spontaneous fluctuations constantly occuring in neurons (and other abundant sources of neural noise) should  prevent any such organized thinking (with very accurate recall) from occurring, if our thinking were to be coming from our brains. Later Nail switches to a thought-as-frozen-ice metaphor and then to a thought-as-riding-a-wave  metaphor, neither of which is any better than his "whirling water" metaphor.

What Nail has given us here is the same old nonsense reductionists are always trying to get away with: the trick of trying to portray human bodies or human minds or human mental phenomena as thousands  of times simpler than they are, and then offering some "explanation" for such crude little crayon sketches resulting from their ridiculous oversimplifications. 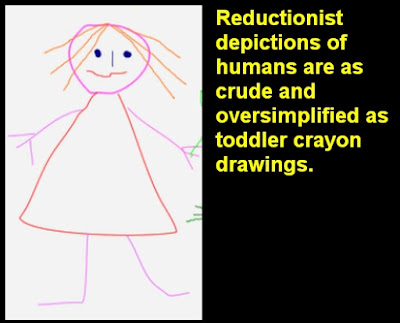 Nail tries to impress us with a little neuroscience jargon by using the phrase "cross-frequency coupling."  But when he then says "it works a lot like syncopation in music," we should see that such a concept does nothing to explain how a very noisy brain could be capable of such accurate memory retrieval, accurate complex calculation and very complex organized thinking.  The fact that Nail's essay fails to use either the word "memory" or "signal" shows that he doesn't understand the real problem with noisy brains: that the amount of noise in brains (and the low reliability of signal transmission across synapses in brains) should be sufficient to make it impossible for brains to be capable of accurate recall of large masses of information, and also incapable of the type of accurate signal transmission needed for complex and accurate mathematical thinking to arise from brains.